Composing wirelessly on the 5D3

Over the years I've evolved an approach to image capture that is heavily/totally dependent on Magic Lantern. In this post I will be discussing infield wireless connectivity.

As my main camera is a 5D3, this has been the main focus of my experiments, where I'm looking to be able to read the 5D3's fixed LV screen in bright sunshine and/or when the camera is in an unusual position, eg close to the ground when doing a WA shot, so it is difficult to see.

I've tried various LCD hoods and loupes, ie to shield the screen from bright lights, and currently use the Swivi 5, as it gives me straight through and 90 degree viewing: 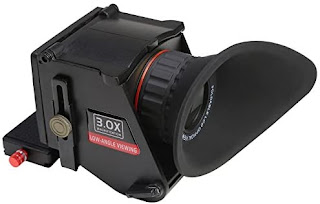 Also I now have all my cameras 'caged'. Although a cage is usually associated with video capture, I find it a useful addition for photography, as it adds robustness to the camera, extra means of picking it up, and attachment points for 'stuff'; thus, in the case of smaller cameras, such as the EOS M, it allows me to add on a handle.

Recently Hollyland, who are known for their wireless Tx/Rx units for video, released a new product that got my attention: the Mars X. 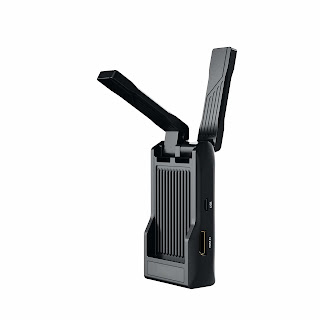 The device is mechanically robust, 'affordable', and operates stably at a long range over 5GHz (300ft LOS).

The unit's interface is (very) simple and takes the HDMI output from your camera (note it must be p not interlaced) and wirelessly transmits it to an (IOS or Android) phone or tablet, that becomes your wireless monitor. Interestingly, you can transmit to three devices at the same time.

There is a very good app that allows you to look at the HDMI out, be it the LV feed, ie for composing, looking at one of the Canon menus or carrying out a Canon image review, or, importantly for me, looking at the ML menus and the ML LV overlays.

The main use case for me is to use the Mars X when I need to set the camera up and/or compose, and I can't readily see the LV screen.

As an example, if I was in a cathedral and placed my camera on a Platypod on the ground and wish to use DOFIS to set my focus and MUSIC to capture a silent bracket set. Using the Mars X I can easily see the LV on my iPhone/iPad, whilst operating the buttons on the camera. I could even attach the iPhone to my cage or handhold the iPhone.

To demonstrate what the Mars X can do, I set my 5D3 up on the Platypod and placed it on my dinning table: 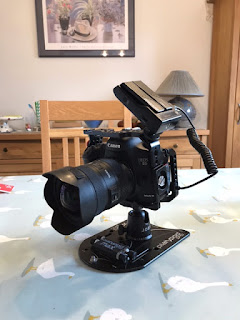 Here we see the Mars X (antennae closed) attached, via a cold shoe, to my 5D3 cage. The Mars X has a self contained battery, which the manufacturer says is good for an hour. There is a USB-C charging port, thus I could, if required, add a power bank to the cage as well.

Finally, to give some insight into what the Mars X can do, I've placed my iPad on the table and videoed it whilst I fiddle with various settings on the camera.

Two things worth noting: the latency is quoted at around 70ms and is OK for my use. The screen goes blank if the camera isn't feeding the HDMI out (obviously), ie when the camera is switching between screens or an image is being captured.

The video was captured by the Mars X app, which can also capture screen images. Note in this experiment, there is no sound.

The video shows the Mars X interface and tools, plus, towards the end, me interacting with ML and my two scripts (DOFIS and MUSIC) and using DOFIS to provide focus feedback as I focus bracket, ie DOFIS feedback telling me where to focus next:

Bottom line: I think the Hollyland Mars X unit is an affordable alternative to buying a Swivi 5 loupe and, via the Hollyview app, it gives you great access to your camera's LV, plus the app has several additional tools (some of which are redundant if you have ML), eg histogram, waveform and focus peaking.

So, it's a thumbs up from this simple photographer!

Posted by Grayheron at 6:15 AM