In this post I'll discuss the latest MUSIC tweaks and look at Use Case 7: Full Resolution Silent Picture (FRSP) bracketing.

In the latest version of MUSIC (downloadable from the right) I've:

The  MUSIC menu for use case 7 now looks like this: 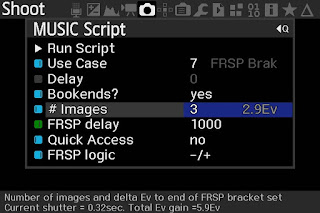 If the "-/--" or "+/++" options are chosen, then MUSIC takes the requested number of images from the current FRSP-set shutter to the indicated FRSP end point, ie 0.3s or 15s.

Irrespective of the FRSP logic chosen, MUSIC tells you the image to image delta Ev and, at the bottom of the screen, the current shutter time and the total Ev you will gain. The maximum being 5.9 Ev, as shown above, taken from 0,3s or 15s.

If, for example, I increase the number of images to, say, 5, the MUSIC menu would look like this, showing the Ev delta is now 1.4Ev, as opposed to 2.9Ev with 3 images: 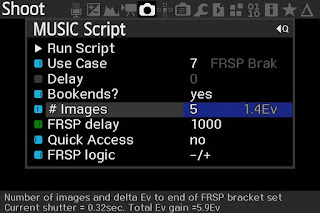 I included use case 7 to cover the times I wish to exposure bracket with no shutter/camera noise, eg in a church or cathedral, say: albeit limited to shutters between 0.3s and 15s.

Of course, at the moment, because of the COVID-19 situation, I can't get out, so I'm limited to demonstrating use case 7 at home.

In this demonstration, of an ETTR bracket capture from the FRSP fastest shutter time, I put the main ceiling lights on and I'm looking outside. I'm using my EOSM with an 11-22mm EFM lens, set to 11mm. I've also fitted a variable ND, so that I can ensure I can meet the FRSP criterion of a minimum shutter of, say, 0.3s.

Once ingested into, say, Lightroom, I then synced the white balance across the bracket set and did a round trip to HDR Efex Pro 2, as I find that LR HDR Merge, without the Exif data, struggles with processing the FRSP bracket set.

In Lightroom the FRSP bracket set, covering 0.3s to 15s with three exposures, looks like this:

Whilst in LR, if you haven’t recorded the delta Ev of the bracket set, it is easy to estimate it by moving the exposure of an image to match one of its neighbours.

After a round trip to HDR Efex Pro 2, explicitly setting the delta Ev, the final (demonstration) image, with a little LR tweaking, looks like this: 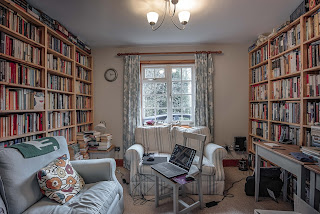 In future posts I'll look at other MUSIC use cases: but for now, anyone using MUSIC should be able to capture silent exposure brackets, with up to 6Ev 'lift' for the shadows.

As usual I welcome any comments on this post and/or MUSIC.

Posted by Grayheron at 4:41 AM