In the last post I took a quick (re)look at the depth of field issues we face with macro photography. In doing so I took a first step at accounting for diffraction in the circle of confusion, but, as I flagged up, this ignored the impact of magnification on the diffraction blur, ie I assumed a fixed (infinity) diffraction.

The expression for the infinity-based, diffraction aware CoC, used in the previous post, was:

Where N is the aperture, as stated on the lens, ie at infinity.
BTW the 4N/3 estimate of infinity diffraction is one of several models that could be used.
For macro work, we need to use the effective aperture in the above, ie multiple N by the so-called bellows factor (1+m/p):

The depth of field expression, accounting for magnification, pupil magnification and diffraction, now looks like this:

One interesting feature of the above DoF expression  is that it says nothing about the focal length of the lens or the crop factor. All such 'complications' are compressed into simply thinking about the acceptable total blur, ie c above.
So what does the depth of field look like as we vary the aperture?

To keep things from getting too complex, let's first assume a symmetric lens (p=1) at unity magnitude (m = 1). Let's use a total CoC of 0.03mm, eg we are on a full frame sensor and not seeking to create a large print. The depth of field (mm), now looks like this: 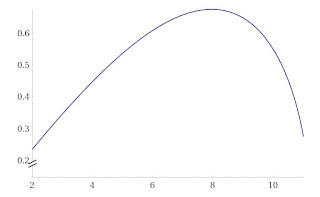 Here we see the horrible truth about macro photography. The 'full', diffraction aware, depth of field is really small and we should adjust the Rule of Thumb we used in the last post, which ignored the magnification impact on the diffraction blur.

A more enlightened Rule of Thumb, to find the optimum aperture for the macro, diffraction aware depth of field, appears to be more like: divide the total blur you can accept, in microns, at least by, say, 4. But note in reality you also need to account for the pupil magnification when calculating the diffraction and, critically, the above is only 'true' at a magnification of 1. At higher magnifications things just get worse, for example:

In the above DoF contour plot, where we are varying m and N for a symmetric lens (p=1), we see how the depth of field, the vertical axis (mm), falls off, as does the optimum aperture, as we increase magnification:

The bottom line now appears to be:

Posted by Grayheron at 6:47 AM