A quick (re)look at macro depth of field

Although my Magic Lantern and CHDK depth of field work is directed at deep focus photography, I have a passing interest in macro photography, which was rekindled this week when Tony North gave a fantastic Zoom talk at my camera club.

Of course, macro photography, as well as having its own artistic merits, has unique depth of field (DoF) challenges.

Unlike non-macro photography, the depth of field split, in front and behind the point of focus, may be considered symmetrical.

To appreciate the DoF challenge we can conveniently make use of the following expression for the total depth of field - one among many you could use:

Where c is the so-called defocus circle of confusion, m the magnification, p the pupil magnification and N is the infinity aperture number.

If we assume a symmetric lens, ie the pupil magnification equals unity, which is not usually the case, we can simplify the expression. Note that the depth of field will change if you account for the pupil magnification, either in your favour or not according to the lens design, ie tele or retro. A tele designed lens being the best for macro.

The symmetric, macro DoF expression is:

Of course the total blur is also impacted by a diffraction blur, which, in the visible bands, ie not IR, we can assume is about 4N/3, in microns.

The defocus and diffraction blurs are usually taken in quadrature, giving us a diffraction aware circle of confusion expression of:

Where c is now the total blur, ie circle of confusion, we can tolerate in microns, and N the infinity aperture number (here I'm ignoring magnification).

After a bit of rearranging we can write the following expression as a first order estimate of the diffraction aware depth of field of a symmetric macro lens:

In the above expression, the total acceptable blur (c) is measured in mm. For example, a recognized full frame value of c is 0.03mm. But, as we know, this will need to be adjusted for the sensor format and medium presentation, eg print size.

As an example of the above expression's impact on our depth of field, let's take a full frame (c = 0.03), 100mm macro lens, and look at how the DoF varies as we change aperture. Magnification, which we recognise as f/(u-f), where f is the focal length and u the focus distance from the front principal of the lens, is set to unity. 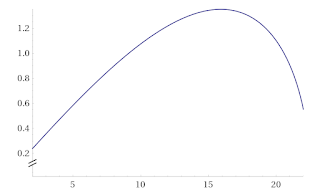 In the above we see the depth of field in mm, plotted against the aperture number. The plot shows how diffraction will limit your depth of field, beyond a critical value: around F/16 in the above example, ie on a full frame camera using a symmetric 100mm lens at a magnification of unity and a total circle of confusion criterion of 0.03mm.

It’s easy to find the aperture that maximises the diffraction aware depth of field, which leads to the following rule of thumb. Namely, halve your circle of confusion, in microns, and use this as your aperture. For example, on a crop sensor I might use a circle of confusion of 20 microns; using the rule of thumb, the aperture that maximises the macro, diffraction aware, depth of field is simply 20/2, ie F/10.

But note that the above ignores the impact of changing aperture on exposure and image quality, eg as captured in a lens chart.

As for achieving greater depth of field; well options are limited in macro photography, which is why many try and make use of focus stacking, ie refocusing the lens or moving the camera a fixed amount using focusing rails, ie a fraction of the DoF each time, to achieve an overlapping focus bracket set for merging in post.

Another option is to back off the magnification, ie focus at a further distance away from the lens. As an example, let's take the above example at F/10 and vary magnification, ie m = f/(u-f), from 0.3 to 1.5, and see the impact on the depth of field: 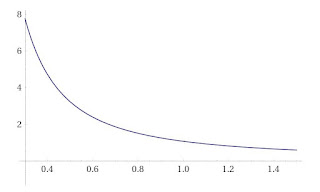 Thus, if you do need more depth of field in a single image, and you can tolerate using a lower magnification, ie less resolution, or sensor pixels, on your subject, then this might meet your needs.

I'm sure I will be posting more on macro photography, but for now I hope this post has served as a little reminder about a rather exacting form of photography.

As usual I welcome feedback on this post or any of my posts.

Posted by Grayheron at 8:20 AM