In the last two posts I have looked a macro depth of field using a simple lens model, but one that accounts for pupil magnification, and noting that magnification is estimated from the front principal of the lens (or perfectly by taking an image and calculating the 'exact' magnification.

The source of the DoF model is Jeff Conrad's excellent 'Depth of Field in Depth', first published nearly 20 years ago, but still one of the best insights into depth of field, albeit originally mainly written for a large format audience.

Conrad gives us the following expression for the 'macro' depth of field, based on magnification:

The above being the same as I present two posts ago, albeit in a different form.

The above may also be written as follows:

As before, if we wish to make the defocus circle of confusion (c) diffraction aware, we can use the Airy model and add this in quadrature to the defocus blur.

However, as has been pointed out on one of the DRPreview forums (thank you Alan) using the 'full' Airy disk and using an RMS approach to couple the defocus and the diffraction blurs, will likely result in a worse case view of the depth of field.

Alternative approaches to using the 'full' Airy model are discussed here, but the bottom line is that, if we accept that using the Airy disk is a worse case model for accounting for diffraction, a more 'forgiving' approach, albeit still, for simplicity, using quadrature to ‘add’ the two blurs, would be to reduce the Airy disk by up to, say, a factor of 2.

We thus have a diffraction range that we could use, influenced by our experience and faith in some of the latest software, that claims to reduce the impact of diffraction softening.

In an attempt to get a working model up and running, in this post I will use the fallowing to model the diffraction blur: 4kNB/3000.

Where k can be used to 'dial back' the influence of the Airy disk, ie k being between, say, 1 and 0.5; and B is the standard bellows factor. Note the above is the diffraction blur in mm, using an infinity aperture, ie the value quoted by the camera, at least for a Canon camera, ie not the effective aperture.

The resultant expression for the diffraction aware depth of field now looks like this, where c is in mm:

Which pragmatically we can 'round' to the following 'Rule of Thumb' expression for the ‘optimum’ aperture number:

Where c is in microns.

On the other hand, if, from experience, we believe that using the full Airy diffraction is 'too aggressive' a model, and post processing software will help reduce the diffraction softening, we could dial that back by using a k of, say, 0.5. Indicating an aperture of 30/2*0.5) = F/15, say. F/16.

Finally, if we are so inclined, we could model the pupil magnification impact by making use of PhotonsToPhotos Optical Bench Hub (Thank you Bill) to gain insight into our lens. 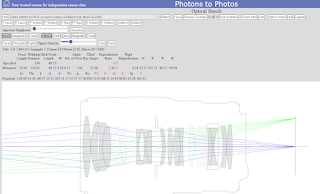 So what's the bottom line here?

I think it is that macro photographers should use the above as a background read. The bottom line is: get out there, capture some images, process some photos and get to know where you are comfortable shooting your macros. Experience should be your best friend.

However, if you are interested in a few numbers, I hope this post has helped you get your head around macro depth of field.

Posted by Grayheron at 4:12 AM