As mentioned in the last post, I'm revisiting my 'legacy' scripts. My aim being to only have two Magic Lantern scripts for all my photography needs.

The first part of the exercise was the DOFIS (Depth Of Field Info Script), that runs in the background, and integrates into the ML upper bar. This script covers all my focus (tilted or not) and exposure bracketing needs.

The MUSIC (MUlti Shot Image Capture) script is thus going to become my 'other' script: biased towards bracketing use cases, other than focus and exposure.

In the first release of MUSIC, I covered super resolution (SR) and noise reduction (NR).

In this post I'm releasing the next iteration of MUSIC, covering two more use cases:

I covered the simulated LE capture use case, in a previous post, so I won't regurgitate all the details here as the idea is simple: capture n, x second, contiguous images and merge them in post into a single image, thus simulating an n.x LE shot.

To capture a simulated LE bracket set, all one needs to do is set the exposure for the scene then use MUSIC to capture your brackets: 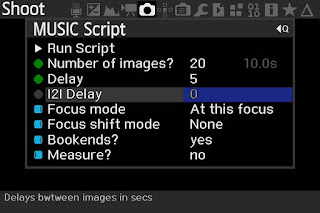 In the above screen capture we see that MUSIC has been used to set a 20 image bracket set. MUSIC tells us that the simulated LE time is 10s, ie the base shutter is at 0.5s.

We have requested a 5s delay at the start of the bracket capture, plus the image to image (I2I) delay is set to zero.

Finally, dark frame bookends are requested, so that we may clearly identify the LE bracket set in post.

All we need to do now is run the script and process in post, eg just like an SR image, using either Smart Objects and statistics, or by adjusting the opacity of each layer, either manually or by using the Merge Layers java script in Photoshop (downloadable from the right).

To eliminate people, we need to use the I2I delay, to inject a delay between successive images. The choice of delay will depend on the dynamics of your scene, ie the mobility of the people.

The following shows a typical PE bracket capture set up: 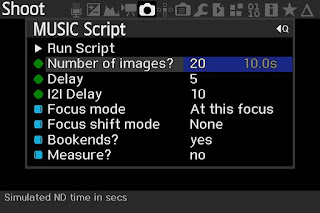 Here we see a 10 second I2I delay has been set.

As usual I welcome any feedback on this post, and if you have any ideas for new DOFIS or MUSIC features, please don't hesitate to contact me.

Posted by Grayheron at 6:55 AM