Last year I decided to 'withdraw' all my ML-Lua legacy scripts and start afresh, as many of the scripts had evolved over a period and changed considerably, as my ideas matured.

Today I'm releasing the next refreshed script. This one aimed at supporting the shooter who is looking to create bracket sets to reduce noise and/or create super resolution images.

I'm calling the script the MUlti Shot Image Capture (MUSIC) script, and it is downloadable from the right hand 'My Scripts' area.

I'm not going to waste time discussing noise reduction and super resolution bracketing, as others have covered this, eg:

MUSIC is a very simple script and arguably isn't required, however, I decided to write it as it has a few features that support the user, that are not found elsewhere, eg:

Dark frame bookends is something I find to be essential if I'm capturing many bracket sets, as the bookends help differentiate the various bracket sets in post.

Focus jiggling is a non proven way to do super resolution and based on the 'assumption' that moving the lens focus between images may (sic) create small image to image movements at the sensor pixel level, eg a few microns, because of lens element tolerances and movements. As I say, this remains unproven. However, if you can't carry out 'normal', handheld super resolution bracketing, eg because of shutter speed, then focus jiggling may introduction enough image to image jitter to allow you to carry your super resolution processing. If it doesn't, at least you will be able to reduce the noise in your image, ie by sq.root(n); where n is the number of images taken.

The focus measurement feature in MUSIC allows you to measure the number of small focus steps between your current focus and infinity. This is simply a bonus feature, not related to NR or SR image capture. 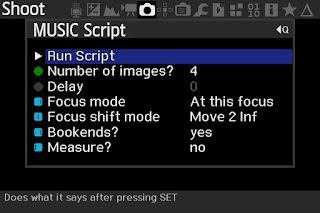 I believe the menu is self explanatory, but note:

To run the script simply press SET with 'Run Script' selected. If 'Measure?' is selected the script will provide on screen feedback of the number of (small) steps between the current focus and infinity.

As for post processing: as others have written about this, I won't go into detail here, other than a few words on how I do super resolution processing:

Bottom line: I intend to slowly refresh/republish my legacy scripts. Hopefully MUSIC will help those looking to capture NR or SR bracket sets. As usual I welcome any feedback on this post.
Posted by Grayheron at 5:34 AM