In the last post I showed how to maintain, what I called, a '32 bit' exposure and focus bracketed workflow throughout your post processing, ie from Lightroom, in and out of Helicon Focus, and if required, in and out of Photoshop.

Of course, these files are not really 32 bit, they are, in fact, 16 bit floating point 'RAWs'.

As Eric Chan, one of the lead developers at Lightroom, stated:

"With 32-bit floats, we’d have greater range (say, over a hundred stops vs “only” 30 stops for 16-bit floats).  But photographically speaking, I’m not sure this is useful.  Let’s say you do a rather extreme 5-shot bracket, spaced 3 stops apart … we’d have a spread of 12 stops (+6 to -6), plus the base dynamic range of a camera (at most 14 stops), which means a total dynamic range of 26 stops.  A 16-bit float file is sufficient for even this case."

"Probably the easiest way to think of it is that the merged HDR DNG does not have any of the Develop processing controls applied to it yet.  For example, white balance, camera profiles, lens profiles, clarity, etc. — none of that stuff is yet applied to the HDR DNG.  So you have just as much freedom to adjust these HDR DNG files as you do with regular raw files.

If you’re more comfortable thinking of image processing stages, then the correct analysis here is that HDR DNGs have indeed been interpolated/demosaiced, but are still ’scene-referred’ in that they have not yet been further processed.  This means that the pixel values in the image still have a direct linear correlation with the amount of light that was actually captured by the lens and the camera’s sensor  (this is the meaning of ’scene-referred’ by the way).

Thus, technically, you could say that the HDR DNGs are not exactly “raw” (since they’re not in mosaic form) and they’re not yet “rendered” (because the Develop controls haven’t been applied to them) …  Instead, they’re somewhere in between, but much closer to “raw” than to “rendered”.  Perhaps we should call them “rare”?  Ok, I’m joking …

Regarding M-RAW / S-RAW:  You could say those files are also “rare” or “partially processed” but much more so than HDR DNG files are.  For instance, M-RAW/S-RAW files have white balance already baked in, so if you need to change the WB later, you may introduce some artifacts since some colors may already be clipped.  M-RAW/S-RAW files also sub-sample the color information to save space, so there will be small amounts of color bleeding at edges.  HDR DNGs don’t have these limitations."

Thus, although the files get large, the advantage of using a 16 bit float workflow is the data/tonal 'fidelity', ie more for you to manipulate in ACR, Lightroom or Photoshop.

In this post, I will show how you can achieve a 16 bit floating point workflow from a single Dual-ISO (or non-Dual-ISO) image, with (or without using) focus bracketing.

The test subject is my usual indoor scene: so forgive me for that.

I then simply pressed my DOFIS trigger button, the RATE key on my 5D3, and DOFIS captured three focus brackets, each time taking a Dual-ISO. Here is the first Dual-ISO capture, ie at 28cm: 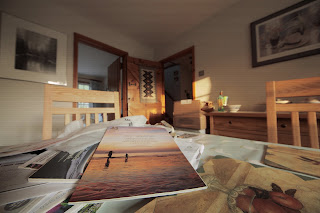 Once ingested into Lightroom, I used the Dual-ISO plugin to process the images to DNGs.

I then created virtual copies of these three DNGs, giving me two images at each focus position. Although you could tweak these images, all you are doing is to visually enhance them, so it’s best to leave the data alone, ie don't abuse that 16 bit floating point data too soon!

I then, in turn, selected each pair of 'images', ie the real one and the virtual copy, and pressed Crtl-Shift-H, to create a 32bit version of each image.

These three 16 bit float (DNG) images then did a round trip to Helicon Focus. Note you need to ensure the image stays as a DNG throughout.

Once back in Lightroom, I tweaked the final 16 bit floating point image for its ‘finished’ look. 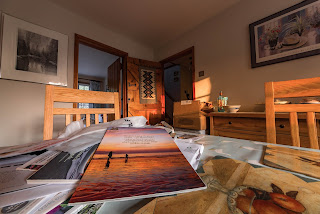 Bottom line: if you are interested in using your image data to the full extent, you might like to try the above 16 bit float workflow, with Dual-ISO images of not.

As usual I welcome any comments on this post.

Posted by Grayheron at 1:00 AM