It's a windy day outside and the pestilence remains with us in the UK. So, in this post, I'm going to talk through an indoor test of using DOFIS in full auto exposure and focus bracketing modes.

My use case is a high dynamic range scene, for example, in a cathedral, where I also want to capture the details from the nearest focus, say floor tiles, to a blur informed infinity, ie beyond the hyperfocal. But in this post we will have to make use of our library.

Having composed my shot, I first placed the ML RAW Spotmeter in the area where I wished to see shadow details: the book in this test.

Having done this, I then used the ML ETTR functionality to set the base exposure for the highlights and noted the spotmeter reading of -9.5EV, which I rounded to -10Ev.

I decided to place the shadows no lower than 2 stops down from the 18% grey zone, ie Zone V, which is at -6Ev down from ML's 0Ev.

These were the DOFIS Menu settings I used in this test: 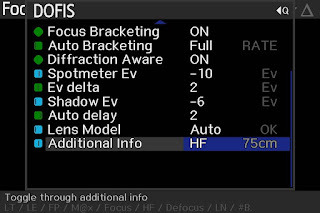 We see that: I have selected Full auto focus bracketing; that diffraction aware is on so DOFIS will calculate the defocus CoC (I had set a CoC of 30 microns in ML, ie the total blur in DOFIS); the spotmeter value has been entered as -10Ev; I'm using an exposure bracketing step of 2Ev; I'm telling DOFIS to bracket until the shadows (where the spotmeter is placed) are greater than -6Ev; and, after I trigger things with my selected button (the RATE key on my 5D3), inject a 2 second delay before taking the first image.

BTW we also see that the diffraction aware, hyperfocal distance, from the sensor, as calculated by the DOFIS split lens model, is 75cm. Note that the Lens Model is showing OK, ie we are using a registered lens, thus the magnification at the minimum focus will match the manufacturer's or measured value.

I used an aperture of f/8, set the ISO at 100 and the 12mm lens to its minimum focus, ie 28cm from the sensor, and DOFIS alerted me in the DOFIS LV feedback window that It will take three focus brackets. I then simply pushed the RATE button, my 5D3 trigger button, and watched DOFIS do its magic: giving 12 images, ie 4 exposures at three focus positions. 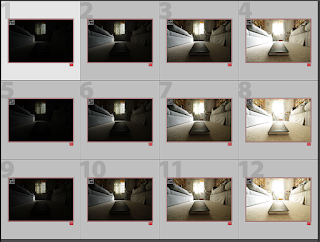 As for the focus positions that DOFIS selected: the first, of course was at 28cm, but what about the other two? Using Jeffrey Friedi's Metadata plugin in Lightroom, gave me access to the EXIF from within LR, with the Canon reported, lower and upper focus distances, as:

The final image being focused at over twice the hyperfocal, ie giving an infinity defocus blur of under half of that of an image taken at the hyperfocal.

As for post processing, I wanted to maintain a 32 bit process throughout, so the first step was to create a 32 bit DNG master file at each focus position, ie giving me +/- 10Ev processing latitude in Lightroom.

In the Library Grid mode, I simply selected each of the 4 exposures and pressed Alt G, thus stacking them. This gave me three stacks that I highlighted and processed in LR with Photo Merge to HDR.

I then did a round trip to Helicon Focus with the resultant three 32 bit DNG images, using Method B in HF to focus stack the 32 bit images.

After returning to LR from HF, I finally tweaked the resultant, exposure and focus stacked 32 bit image: giving this final 'test shot': 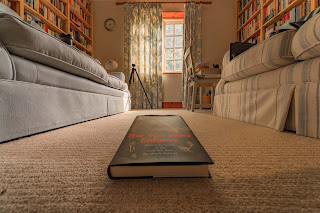 An alternative approach would have been to send the final 32 bit image to Photoshop, duplicate this, thus giving me two layers to blend, eg with luminosity masks, ie one for the shadows and one for the highlights, both with access to Camera RAW and the full +/- 10 Ev range.

I hope this post has illustrated the power of DOFIS to those Canon EOS photographers who are seeking the optimum capture for deep focus scenes with or without high DR content; as in a cathedral, say; and wishing to maintain a 32 bit workflow throughout, ie to ensure a +/- 10Ev exposure range in Lightroom and ACR.