For anyone processing brackets, you will know about 'the trick' of going into the Library module, repeatedly selecting your bracket sets and using (PC) Alt-G to place them in a stack. Once in a stack you could then run LR/EnFuse in batch mode: but Lightroom's HDR merge did not recognise the stacks!

Thus you had to individually send each stack to LR's HDR Merge...until now.

Lightroom's latest release now includes a batch mode functionality for its merge tool, so you can batch process exposure brackets.

As a simple test, I took an exposure and focus stack with my EOSM3, using my CHDK M3 script.

I set the camera to F/8 at 11mm and (inadvertently) left the camera on ISO1000. Using the CHDK histogram I set an ETTR base exposure, set up the script to focus stack from the lens minimum focus and to take an additional (Zero Noise) exposure, at each focus, at +4Ev. Finally I set the overlap to 20 microns (which established the hyperfocal in the script, H) and the infinity shot to 3 x H, ie an infinity shot at about 7 microns.

This resulted in 6 focus brackets, four from the lens focus minimum to about H/3, one at H and one at 3H.

After ingesting into LR I first put each of the 6 focus bracketed exposure sets into a stack. Then I selected the 6 stacks and selected the LR HDR merge, which, with its new functionality, created 6 HDR images, that is one for each focus point.

This was followed by a round trip to Helicon Focus and voila I ended up with the, non ISO100, test shot. 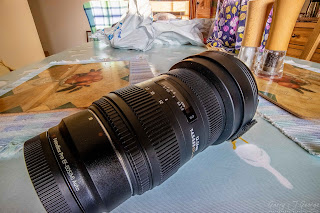 As I say, thank you Adobe.

Postscript: here is another test image, this time at ISO100 ;-). Only needed 8 images, ie 4 focus brackets, each with 2 exposures. 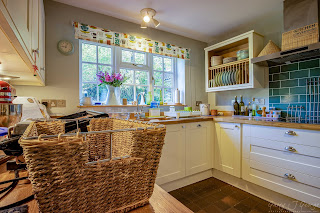 Postscript-Postscript: and what the 12mm Rokinon Fisheye sees from the same position, defished with FishEye-Hemi.