NOTE: This is an update of the original post

Assuming, like me, you use an ETTR exposure approach, then you will know that the challenge is knowing when you have reached the 'optimum' ETTR setting.

Having said that a LV histogram is your ETTR friend, it isn't a perfect one. Most/all LV histograms are 8-bit, or certainly not 14-bit RAW.

Take the Canon M3 running CHDK. The CHDK histogram is an 8-bit extraction of the viewport data. That is a histogram with a 256 tonal resolution: darks to lights.

The CHDK histogram is certainly better than nothing, and, relative, to the Canon histogram, at least it can be displayed in log mode.

One downside of the histogram is 'hidden' from most users: that is the way the data is mapped to each stop.

However, things are more complicated, as the above assumes the data remains linear throughout, whereas the viewport, from which the histogram is created, is gamma encoded: I assume at 2.2. Plus the viewport will be impacted by the Camera's picture style settings and WB, eg if UniWB is being used.

Thus, for the gamma encoded CHDK and Canon histograms, the 1/5 line down from the highlights is, in fact, at about 2/3 stops down from saturation.

Finally, another problem in using a CHDK or Canon histogram is that it they are not always easy to read: they are rather small on the LCD; and, anyway, when ETTRing we are only interested in the 'top stop'.

In order to help nail an ETTR setting, I'm pleased to introduce an 'ETTR Meter' option into my M3 Landscape Bracketing Script (downloadable from the right).

The ETTR  Meter gives visual feedback on the three 1/3 stops down from 100% saturation.

The user can set two trigger values to control the meter, which are set as a percentage of the total histogram count: namely:

The ETTR Meter can be switched on via the M3 script menu under exposure help.

When running the ETTR Meter sits in the middle of the M3 info bar and shows the status of the top three 1/3 stops: highlights on the right. 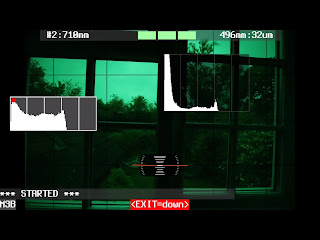 In the above (UniWB) screen grab we see the CHDK (log, compared to the Canon linear) histogram and the M3 DoF bar at the top, show: we are focused at 710mm; we need two focus brackets to reach the hyperfocal; the near depth of field is at 496mm and the infinity blur is 32 microns. Note the overlap circle of confusion was set at 15 microns.

The ETTR Meter's three green bars show that the histogram count in all three third stops is less that 0.5%. So let's change exposure. 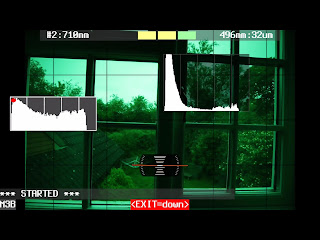 Here we see that we are getting closer to the ETTR point, as the top 1/3 stop remains green, whereas the next two 1/3 stops down are yellow, showing the count in each is over 0.5% of and less that 5% of the total histogram count. So let's increase exposure again. 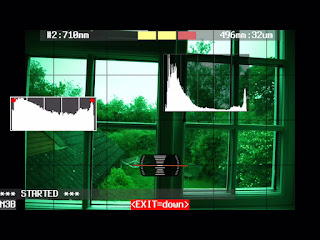 Here we see the final ETTR position, with the exposure just sending the top 1/3 stop into the red. We could back off, but experience says this setting will likely be OK.

Bottom line: The ETTR Meter is there to support your ETTR setting on the M3, which doesn't have a  highlight warning feature in liveview. In the end, your knowledge and experience as a photographer, together with the CHDK and/or Canon histogram, and the ETTR Meter, should mean you capture the 'best' ETTR data for RAW post processing.

Posted by Grayheron at 7:17 AM