[BTW the first post was amended to tidy up my language, thanks to some comments I received on the DPReview forum: many thanks to @Entrophy512].

In standard exposure bracketing we would set our camera to a base ISO, say, ISO 100 on my Canons, and capture as many images, separated, say, by 2Ev, to ensure our exposures capture enough information, down into in the shadows, and contain at least one image with no blown out highlights, for post processing through one of the following typical workflows:

Although auto tone mapping had a bad reputation in the early days, these days most tone mapping software can achieve a reasonable natural look. With fusion based auto blending, eg LR/Enfuse, potentially creating an even more nature blend.

However, both these approaches, despite auto correction tools, can introduce unsightly artifacts associated with movement, say, of trees, between images.

Manually blending, with or without luminosity masks, potentially offers the highest quality result, but does require more skill/effort in post processing.

All the above have a similar capture workflow:

Or, put another way:

Without going down a rabbit hole of detail, many photographers will recognise the following sources of noise:

Not all noise sources are the same, and some we can ignore, ie as photographers we have no/little control over them; although in the end we observe an integrated impact of all the various noise sources.

For most photographers I believe it is worth understanding two sources of noise in particular, as 'optimum' camera settings and post processing can be used to reduce these noise sources, if needed, ie extended the DR of the post processed image.

Ignoring image to image motion for now, and keeping things simple, shot and ISO noise reduction can be achieved by simply averaging multiple images: either in the camera, in the case of the Phase One IQ4; or in post for the rest of use ;-)

As noise reduction goes as the square root of the number of images processed, we can thus reduce the noise by, say, a factor of 4, by taking 16 images and averaging then, either through opacity or smart object statistics.

This approach shows the most benefits in the shadow areas of an image, where the signal (number of photons captured/converted), and the tonal content, are low. However, it can also help to clean up a 'perfectly’ exposured scene, as shot noise is still visible at, say, just below maximum well capture, and can be clearly seen if you zoom in on a flat, featureless, well lit, surface.

At this point many will be saying: why bother?

After all, 'normal' exposure bracketing is fine and it's simple. But as stated above, it does come as a price:

If, on the other hand, we took a burst of 16 images at an exposure of 1s, the noise in the shadows and highlights will be reduced by a factor of 4. Thus, if shooting at ISO 1600, the post processed image would have noise characteristics of an ISO 100 image. Or if shot at ISO 100, the photon noise will look like an image shot at around ISO 6.

Shooting at high ISOs may be a useful tool to reduce fixed pattern noise, however, the ISO that you need to shoot at will be camera dependent. From my experience, a useful rule of thumb is to seek out an ISO just above where your camera exhibits ISO invariant like characteristics and above where the fixed pattern noise becomes less noticeable. Thus on my Canon M I might use an ISO of 800 - 1000, but on my 5D3 I would use an ISO of 1600.

Exploiting the dynamic range of modern cameras and using the above insight, allows us to consider an alternative high dynamic range, ie where we would normally bracket, exposure capture strategies, based on using one or two fixed exposures capture sets, ie one set for the scene; or one set for the highlights and another for the shadows.

If you also wish to exploit ISO, ie for a camera that is not fully ISO invariant through its ISO range and where the scene’s DR is not too 'extreme', the capture workflow could go like this (composition and focus ignored):

Note that for cameras that are fully ISO invariant, ie from their base ISO, you only need to capture sufficient images to address the noise in the shadows. That is shoot at a single ISO value.

To further emphasise the potential practicality of the above, consider where cameras are at the moment. The new kids on the block can capture images at 20-30 images per second, with no buffering.

As for the above example, ie a two set ,4+8 image capture, for the highlights and shadows appropriately; if the base exposure was 1s, as in the exposure bracketing above, the integrated capture time would now be 16s, as opposed to 21s.

The attached three images are a simple test of the above I just took with my EOS M, at a focal length of 11mm: 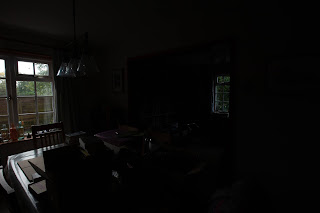 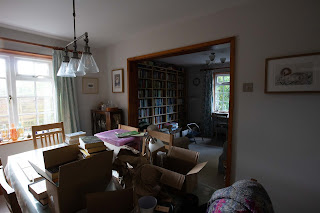 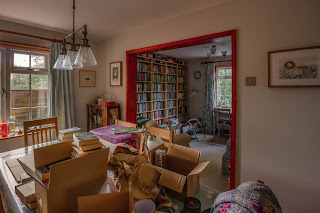 The top image is one of four ETTR exposures taken at a ISO 100, f/8 and at 1/15s. The middle image is one of eight taken at the base exposure, but ISO shifted to ISO 1600: note I 'only' took 8 images in this case, ie rather than 16. Thus the shadow noise reduction will result in the image taken for the shadows looking like it has noise as if it was around a ISO 200 image.

The last image is a quick development of the other two, where I processed the two stacks in Photoshop, manually blended in the appropriate details from each image, and finished toning and colour grading back in Lightroom.

As usual for me, this has been a 'bit of fun'. Will I use it as an alternative to 'normal exposure bracketing?

Maybe: as I have all my Canon cameras running in-camera Lua scripts that greatly speed up, capturing image sets like the above. Having said that, I believe most modern cameras are able to capture the above in a very lean manner. Plus the frame averaging approach to extending DR has the potential advantage of creating more natural or organic looking images where there is movement in the scene, eg wind.