MUSIC: now for those with senstive hearing

In this post I'm pleased to announce that MUSIC is now 'fully' compatible with ML's Full Resolution Silent Picture, DNG photo capability, ie no mechanical shutter action. Note: I personally have decided not to 'play' with the 'video stuff' ;-)

The usual FRSP limitations apply, ie shutter speeds need to be between about 0.3 to 15 seconds. MUSIC doesn't check FRSP shutter compatibility, so if you see things not working as expected, check that your shutter speed is in the 'sweet zone'.

To use FRSP with MUSIC, you must have the Silent module switched on. MUSIC will handle the FRSP set up for you: so all you need to do is enable the silent module.

Note that you must also have other 'features' switched off, eg advanced bracketing etc, and others switched on, eg expo override and expo sim should be on.

Also, I've limited FRSP to only work on the 5D3; but you can remove this check in the script if you wish. Plus AF needs to be off if using FRSP. I did this as I found I was trying to balance too many things in trying to get FRSP robustly running in MUSIC.

Another limitation is that FRSP can not achieve seamless (near zero gaps in time) image to image capture. If you need this, then use the normal shutter approach.

To make FRSP 'robust' in MUSIC, I've added a card-specific feature, ie FRSP write delay. On my 5D3, with my card, I find a delay of 1000ms about right. If you see 'dropped frames' or the script prematurely finishing, then you may need to adjust this delay. 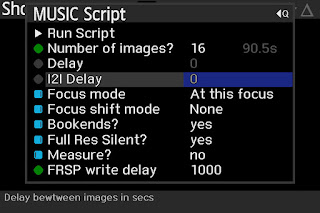 In the above screen capture from my 5D3, we see the new FRSP feature, which is either enabled (yes) or not (no). We also see that I've set, after experimenting, a FRSP write delay of 1000ms. This is on top of the script managed delay, created by waiting for LV to return: during FRSP capture LV is 'blanked' by ML and I use this to manage FRSP capture timings.
Also note that FRSP requires focus shift mode to be set to none. MUSIC has some error checking built it, but isn’t perfect ;-)

We also see in the above one of the use cases, albeit taken indoors, where I wanted to create a 90s simulated LE, ie with 16 images: that is the base shutter was about 5.5s. Note I requested a zero delay at the start and a zero additional delay between images.

In this next screen capture we see a typical people elimination use case, where I'm requesting 4 FRSP captures with an image to image delay on 10 seconds (hoping the people move between images): 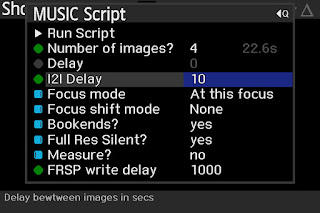 Of course, as these are FRSP DNGs, they are 'hidden' in the normal Canon in-camera review, but, once ingested into my PC, I can open Bridge, say, where I see the following: 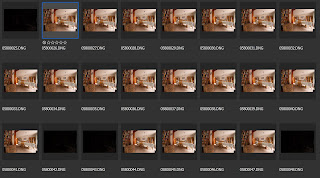 As I requested bookends, each image sequence is clearly delineated. The only downside is that the current FRSP has no metadata, ie shutter time etc. So if this is important to know, then you will need to make a note of this in the field. Plus, remember the above images required no shutter action, ie the capture was silent.

Once I'm in Bridge, or Lightroom, I can then review the images and decide what I want to do. BTW, each of the above was first ETTRed via ML, at an ISO of 100 and at f/10.

As an example, let's look at the 16 image, 90s simulated exposure, and look at the post processing.

After first adjusting one image in ACR, eg bring down the highlights and push up the shadows and blacks, I synced this image to the other 15, and opened up the 16 images in Photoshop.

I ran a stack script, to bring all the images into a single file.

As I was on a tripod, indoors and had no shutter vibration, in this case, I didn't bother aligning the images.

I than ran my merge script and broke the images up into 4s. This first pass automatically adjusted the opacity of each layer (to 1/1. 1/2, 1/3 and 1/4) and set the name of each layer to its block name eg Block 1 or Block 2 etc.

I then manually selected each block of four and merged them, leaving me with four new layers. From here I simply ran the merge script again and merged the resultant opacity adjusted blocks. Arriving at this image (JPEG scaled for this post): 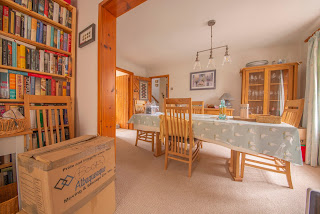 From here I applied Smart Sharpening and adjusted the contrast: 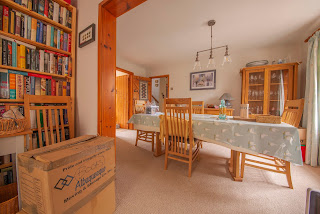 Although this test was a 16 image (FRSP) simulated LE, it clearly is wasted on such a static scene. However, this is also a noise reduction shot, and the final image has a NR of 4 over a single image, eg very clean dark areas and near zero colour noise.

Bottom line: now that MUSIC can exploit ML's FRSP, I now have the ability to create shutterless captures, albeit limited to between 0.3 and 15s.

As usual I welcome any feedback on this post and/or MUSIC.

Posted by Grayheron at 7:55 AM