In this post I'm releasing another use case, silent exposure bracketing, which I consider a useful feature when I'm shooting in certain environments, eg churches or cathedrals, or anywhere a camera clicking away would be unacceptable.

Although ML's Full Resolution Silent Picture capability is limited to exposures between, say, 0.25s to 15s, this still represents just over 7 stops.

I've decided to implement FRSP bracketing over its entire range; starting from an ETTR base exposure of at least, say, 1/4s, although you can start from any shutter time in the FRSP range. This base exposure can be achieved anyway you wish, if necessary, by closing the aperture down (but not too far ;-)) and/or using an ND or CPL etc.

Once the base exposure is set, opening the MUSIC menu will allow you to set the FRSP bracketing: 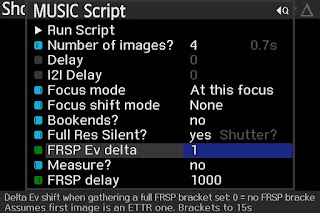 In the above screen grab we see that the FRSP option has been requested and, because in this case the base shutter was set lower than 1/4s, ie at 1/5s, MUSIC is alerting/warning us to be sure the base shutter is OK. You can still use shutters less than around 1/4s, but all these exposures will come out the same, so stick with a minimum shutter of around 1/4s when using FRSP.
Another reason to not go below 1/4s for the base ETTR exposure is that, if you request bookends, you will automatically get the fastest shutter capture that FRSP can do. I personally, use ML's ETTR with a highlight ignore of 0.1%, and both SNRs set to off.

We also see in the above a new menu called FRSP Ev delta, which in the above is 1. A zero value here would mean no FRSP bracketing. Evs of 1 through to 4 are available, with an Ev of 4 giving the option of capturing a so-called Zero-Noise bracket set,

If FRSP bracketing is selected, the script will capture a full exposure bracket set from the base (ETTR) exposure to a 15s exposure, each image separated by the requested Ev delta. In this case the number of images menu item will be ignored.

To illustrate the new MUSIC feature, here is a Lightroom screen grab, of the bracket set of a high DR scene I just took in my house, starting at 1/5s, separated by 1Ev: sadly I can't get to a cathedral at the moment :-( 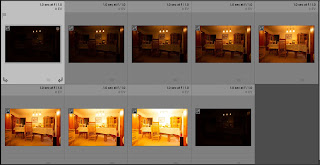 Here we see I requested bookends, to not only help delineate the 7 image bracket set in post, but also give me the fastest FRSP I can capture, ie the bookend on at the start of the bracket sequence. I usually reserve this as something I can use in post, if required, ie masking it in to the final HDR merge.

Another thing to remember is to record the delta Ev you used, as FRSPs don't have exposure metadata, eg a phone snap of the screen or just write it down. Luckily, FRSP DNGs do have time capture metadata, so at least record the time you took the sequence and pertinent info, eg delta Ev and base exposure info.

As for processing, I personally use HDR Efex Pro, which allows me to explicitly enter the delta Ev I used. Unfortunately, Lightroom's HDR merge will not work as it appears to need the Exif data.

Before undertaking a round trip to HDR Efex Pro, I adjusted the DNGs in LR, eg WB. 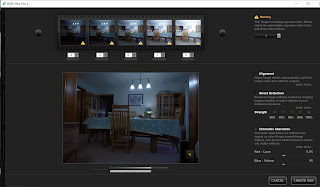 In the above we see the 7 brackets (which is the maximum this MUSIC feature will take, being limited to shutters between 0.25s and 15s. We also see I've told HDR Efex Pro that the Ev spacing was 1Ev. In this case, I have not bothered with deghosting and alignment, as I was on a tripod, indoors.

Back in Lighroom, I then adjusted the image as required to create this uninspiring image :-) 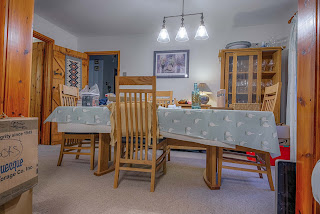 I hope this additional little feature is as useful to others as it will be for me. As someone who likes capturing high dynamic range scenes in cathedrals, I'm looking forward to using this silent exposure bracketing tool.

As usual I welcome any comments or feedback on MUSIC, or any of my posts.

Posted by Grayheron at 8:41 AM