As we know, a modern lens is a balance between high precision engineering and optical science.

You can't design or make a modern lens without a lot of computational tools, which most photographers will not have, eg ray tracing CAD packages etc.

Because mere photography mortals don't have such tools, or, bluntly, the need/desire, to access these tools, we tend to over compensate and make use of (highly) simplified models, such as the classic thin lens model: 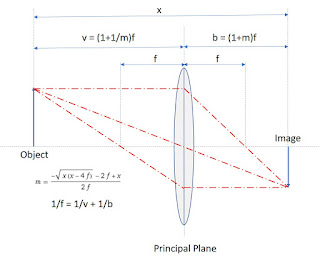 But, as we know, the thin lens model breaks down as we approach the macro end, and fails completely for true macro modelling.

For this reason I personally make use of the so-called DOFIS model, which I've discussed in previous posts, here shown for a pupil magnification (p) >1: 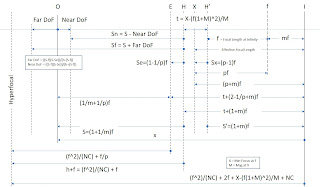 This model provides all the information we need, through reference to the main cardinal 'nodes' or 'planes', to calculate depth of field etc, from macro to infinity, tilting or not tilting.

We make the reasonable assumption that the lens is operating in air, thus the cardinal nodes and principal planes, on the optical axis, are the same. We thus have:

To complete the DOFIS model we need some other information, in order, for example, to calculate the hiatus between the principal planes:

To help photographers understand how the above model works, I've created a lens simulator (LensSim) in the Desmos environment.

LensSim can be accessed on the right under 'My Simulators'.

LensSim has a help screen and is easy to use.

As an example, let's look at a 12-24mm Sigma lens, at 12mm. After entering all the data, which is readily available through the manufacturer or by direct measurement, LensSim gives us the following visualisation: 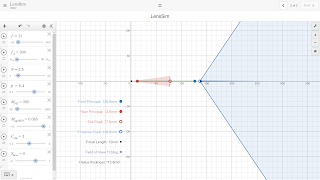 On the left we see the inputs and on the right a LensSim sketch of the layout of the lens, showing all the cardinal points, the hiatus and the (landscape) FoV.
LensSim also shows the image and object space light cones, which for wide angle lenses and small diameter apertures, may require the LenSim user to zoom in to the sketch to look at the details.
In addition, LensSim also tabulates the various key pieces of information.
The x axis is on the sensor plane.

LensSim allows you to change focus and thus see the impact of lens breathing on the position of the various cardinal points and the field of view.

LensSim should help you understand any lens you own, as long as you know a few basic pieces of information, that you can get from the manufacturer's specs or measure yourself.

Posted by Grayheron at 6:45 AM