In my e-class, 'Getting even more out of Focus :-)' and in the TiltSim simulator, I created a simplified tool to allow Tilt/Shift (T/S) lens users to virtually explore their T/S lenses.

The simplification was to use a thin lens model and then assume focus from the T/S thin lens was the same as focus from the untilted lens. That is I ignored the tilt of the optical axis in the simulation, ie assumed it remained as untilted.

The above was an OK approach if you just wanted to get a rough view of focusing a T/S lens.

TiltSim 2 is based on the DOFIS split thick lens model, that ensures the lens equation fits the manufacturers' data, ie Maximum Magnification is correctly modelled at the Minimum Focus Distance.

Focus in TiltSim 2 is along the optical axis and from the sensor. TiltSim 2 estimates the position of the front principal and its movement as you tilt and focus.

Note, as we are using a DSLR T/S lens, the sensor plane does not move.

The only concession in TiltSim 2 is that this version ignores pupil magnification, ie it is assumed to be unity.

The first thing to do is to set up your lens under the Set Up tab: 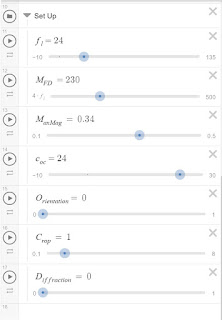 In the above example, I've set up a 24mm focal length lens and set the minimum focus distance and the magnification at this point (both of these are available from the manufacturer's data or by measuring these directly).

A Circle of Confusion of 24 microns has been used, ie a Rule of Ten CoC value.

The orientation of the lens is set to landscape (0): portrait would be 1.

The crop factor is set to unity, ie a full frame sensor is being used.

With the above settings locked in, I can now close the Set Up folder.

The main TiltSim 2 window will look something like this: 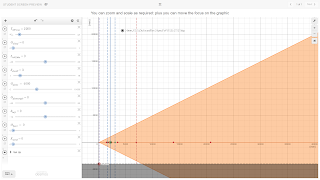 The T_iltFocus slider moves the focus, relative to the sensor, along the optical axis, ie whether it is tilted or not. This slider is set between the minimum focus of the lens and 4 times the hyperfocal, but you can change these limits if you wish. In addition, focus is scrubby on the simulator.

L_tilt10ths is the lens tilt angle in tenths of a degree. TiltSim 2 allows lens tilts betweem -8.5 and 8.5 degrees, but you can change these limits if you wish.

S_electN is a slider to select the aperture number, which is shown in the chart, with some other information. In the above example we see that the aperture is set to f/3.5. The info field's position on the chart is scrubby, so position it where you like.

G_plane and G_planeangle controls where the simulated ground plane is positioned, relative to the sensor. In TiltSim 2 the sensor is always positioned at (0,0). the vertical position of the G_plane is scrubby.

The S_hift slider allows you to simulate shift in the T/S lens.

O_bject and E_xtend provides you a 'surface' to position, which you can use to simulate 'features of interest'.

Finally, the main window of TiltSim 2 shows the field of view of the lens and the depths of field. In the above, as we have zero lens tilt, TiltSim 2 is being used as a normal DoF simulator. The red dashed, vertical line, shows the hyperfocal. The vertical, black dashed line, close to (0,0), parallel to the sensor plane, is the hinge plane. The Hinge being positioned at the lens front principal, at a height of J, parallel to the sensor.

As this post is intended to 'just' release TiltSim 2, I don't intend to spend time looking at its functionality. However, this next screen shot shows TiltSim 2 in its design mode, ie as a T/S simulator. 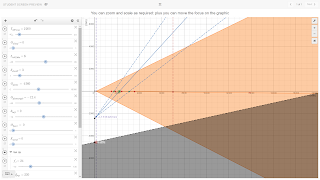 Rather than discuss the above: I suggest those that are interested in using TiltSim 2, take a look at the simulator - all from the comfort of their favorite chair.

Posted by Grayheron at 3:36 AM