More on tilting with DOFIS

As the astute reader will have noticed, I've tidied up my Magic Lantern scripts and have now converged on DOFIS as my only ML Lua script; as DOFIS meets all my needs:

In this post I'll talk about the latest version of DOFIS and how it supports the TS user.

Unlike normal lenses, TS lenses require a little bit of skill/knowledge to use effectively. In previous posts I've talked about the general principles behind TS lenses and written a simplified TS simulator to give the TS user a tool to help visualise TS focusing.

The key points being: 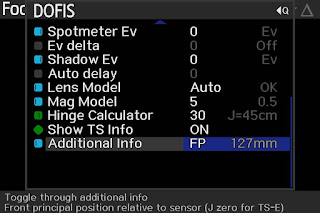 As we can see in the above DOFIS menu screen grab, show TS info is switched on. We also see, that the hinge calculator has been used to select a 3 degree tilt. The hinge calculator tells me that the J height is 450mm, parallel to the sensor plane, from the front principal of the lens.

DOFIS also tells me the front principal is positioned at about 127mm from the sensor.

The test shot was taken as a result of tilting the camera down by 30 degrees and seeking to keep the ground plane in focus, whilst keeping the aperture wide open. 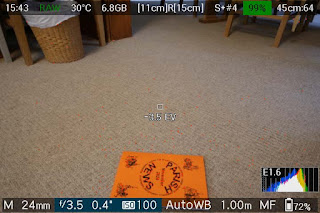 Here we see that I'm at f/3.5 and I'm focused at 1m from the sensor. Although not shown, as there is no feedback on tilt, the tilt was about 3 degrees, which is what I used in the hinge calculator.

We see, in the top right, that DOFIS is providing us LV information on our TS shot, ie the J height is 45cm and the angle of the plane of sharp focus, from the vertical, is estimated at 64 degrees at the current point of focus, which tallies well with our camera tilt of 30 degrees. In a perfect world the camera tilt plus plane of sharp focus for this test should be 90 degrees.

The J height also gives us a way to visualise the slanted depths of field as, at the hyperfocal, the depth of field, either side of the plane of sharp focus is J, parallel to the sensor plane.

Using my, yet to be published, TiltSim 2, we can see what the above looks like: 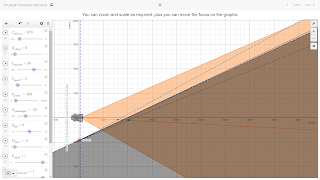 Here we see, if we position the focus to emulate the test shot, the camera tilt shows 25 degrees for a perfect alignment of the plane of sharp focus. Pretty close to our real world example.

Bottom line: the DOFIS TS feedback is there to help you visualise your scene; it is not guaranteed to be accurate, but it shouldn’t be far off.

Posted by Grayheron at 7:50 AM