As mentioned in previous posts, I wrote TiltSim as a pre-visualisation tool to help me, and other DSLR Tilt-Shift lens owners, get to know their expensive lens, all from the comfort of their sofa.

Additionally, I saw TiltSim as a planning tool, ie before you go out into the field.

Many using TS lenses get turned off by mention of such things as the Scheimpflug Principle and hinge line; which may be important for Technical Camera users, eg with front and rear standards and tilting and swinging etc; but for the humble DSLR TS user, things are a little simpler, as we essentially 'only' have two degrees of freedom, that we call tilt and shift, and only tilt will change the depth of field.

We can thus put Scheimpflug to one side and just make use of the so-called 'Hinge Rule'.

For those that wish to look into TS this in a little bit more detail, the Wiki page is a good first read: https://en.wikipedia.org/wiki/Scheimpflug_principle

TiltSim makes assumptions about the lens design and even simplifications, based on using a DSLR, eg small tilt angles, relative to those available on a Technical Camera.

As an example, the focus difference between the tilted lens optical axis and the orthogonal to sensor axis (which TiltSim shows as the x axis) is ignored, as it is related to the cosine of the tilt, which is approximately unity for a DSLR, even at maximum tilt, ie cosine(8.5 degrees) = 0.989.

Plus, the focus in TiltSim is the distance from the lens front principal axis, which we really don't know, ie not the sensor plane. We could make use of a split lens model, as in DOFIS, but it's not worth the complication here, as it won't change our (pre) visualisation objective.

As an aside, gaining insight into how lenses work is really difficult, unless you have access to a lens design tool. Luckily for mere mortals such as myself, Pierre Toscani has published an incredible amount of insight on his blog at: http://www.pierretoscani.com/

In particular, he has recently published a post on the Nikkor PC-E Micro 45mm f/2.8D ED, which gives us some general insight into how tilting works, for example Figure 4 in his post is very instructive. So a great thank you to Pierre. Here is the link: http://www.pierretoscani.com/divers-objectifs-3.html#objectifs-03-02-01

Because TiltSim is not modelling the lens elements in any detail, it is going to become less 'accurate' towards focus minimum, ie the macro end when lens extension is at its greatest, ie the focal length times the magnification. But, as I say, I wrote TiltSim to help me arrive at a few 'rules'; and show me the gross movements, so I could have greater confidence in the field when adjusting my 24mm Canon TS-E lens.

One feature in TiltSim I haven't mentioned yet is the Object simulation: so let's look at it.

So far we have looked at aligning the plane of sharp focus with an 'infinite' floor, ie the camera and floor cross each other, thus you know where to set focus, ready for tilting, ie where the (tilted) lens axis crosses our plane of interest.

But what is you wish to explore a non-floor surface, eg a table, that you wished to capture?

This is where the Object feature comes in handy.

To use the Object feature, all you need to do is switch it from 0 (off) to 1 (on). You now have a surface you can position, so you can explore tilting. As an example, let's look at this simply scenario: 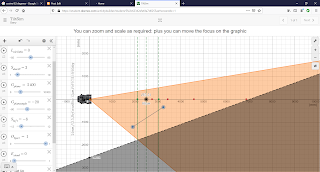 Here we see there is an object, eg a sloping tomb in a cathedral, that we wish to capture, and, compositionally, that we have tilted the camera down by by 20 degrees and added 8mm of shift. The CoC is at a high quality setting of 12 microns, for artistic reasons we wish to use a low aperture of f/3.5, eg to isolate the surface we are seeking to capture.

We also see, we can't fully capture the surface of interest in one non-tilted image, ie the non-tilted DoFs are shorter than we need. Now to be clear, the above example would most probably be OK in real life, but for the sake of this post we will assume we need to tilt as well as shift.

So where do we focus?

From previous post we know we need to position focus where the plane of interest intersects  the optical axis, which we approximate as the x axis on TiltSim.

To help visualise where this is, TiltSim has an additional feature called Extend, which does what is says, ie extends the surface of interest: 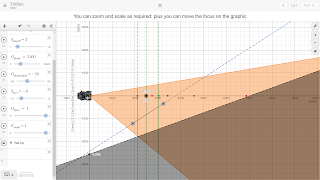 We now approximately see where we need to focus: so let's set focus. 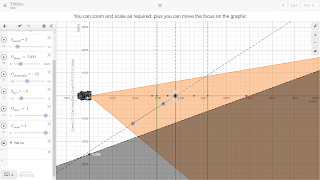 Having positioned focus, all we need now do is tilt the lens until the near surface of the feature we are imaging, or tomb in this case, comes into focus on the zoomed in LV: 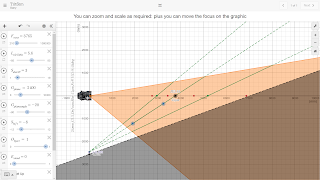 We thus need to tilt just over half a degree to achieve 'perfect' focus alignment.

Once again, remember TiltSim is there to help you pre-visualise your TS use in the field. It is not an exact model of a DSLR TS lens.

Before we end this post, a word on 'realism', as we are using a DSLR and thus fine tuning 0.5 degrees is not possible. The best you can do is use the knowledge you now have, ie set focus where your plane of interest approximately intersects the (tilted) lens optical axis, eg a little shorter than the untilted LV centre, and use LV to fine tune tilt and, if required, refine focus.

Posted by Grayheron at 3:20 AM