In the last post I introduced TiltSim, a tilt/shift (TS) lens simulator, and showed how one focuses a TS lens that is parallel with the optical axis, eg a camera on a tripod that is parallel to the floor that we wish to see in tack sharp focus. The basic 'rules' of focus being:

In this post, the first of a few, I will look at another use case.

As a reminder, in the last post, where the plane of focus we were attempting to focus was parallel to the lens optical centre, all we needed to do was set focus at 'infinity' and tilt to position the plane of focus, ie on to the floor: 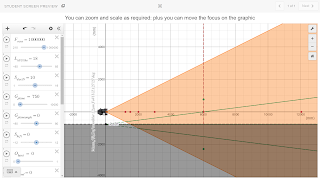 We also saw that to maximise the DoF, all we needed to do is to focus at the hyperfocal: 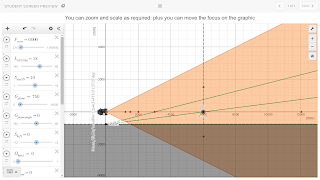 But what if we also wish to tilt the camera, ie the optical axis, as well? 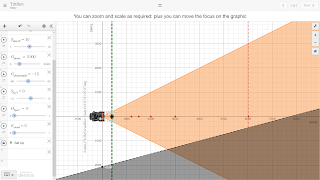 In the above scenario I have kept the CoC at 12 microns on a 24mm TS lens at f/8, eg for a high quality print. In addition, I've tilted the camera down by 15 degress, ie shown by the floor being tilted up by 15 degrees. The camera is positioned at a typical tripod height above the floor. We also see that we are focused at the minimum focus of the lens and with zero lens tilt.

Assuming we wish to have the ground in tack sharp focus from near to infinity, the obvious place to focus would appear to be the hyperfocal: 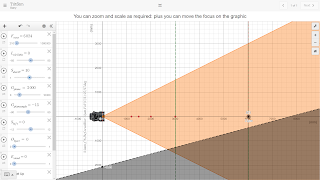 Here we see the problem: namely that the near DoF is beyond the where the field of view (FoV) intersects the ground. However, as we have a TS lens, we know this is not an issue for us.

First, let's look at following the advise some state, eg focus for the foreground and bend (tilt) for the background: 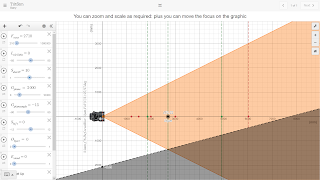 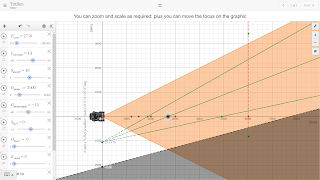 But as we can see from the above, this approach is not that helpful, leading to you needed to switch between the near and the far 'tweaking' focus and tilt, until things look OK.

But, from the first post, we know the correct approach. Namely, focus at the point where the optical axis crosses the plane of interest, ie the floor here, then tilt to position the plane, ie looking at the zoomed in LV in the near field until it comes into focus: 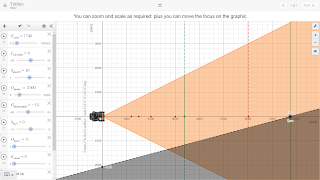 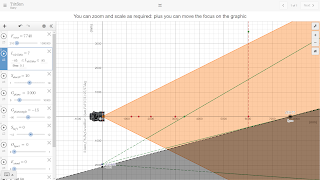 Here we see that, by focusing on the where the optical axis crosses the floor, and tilting by about 0.7 degrees, we bring the plane of focus into near perfect alignment.

Finally, in this post, let's now bring in an additional feature of the TS lens, namely shifting: 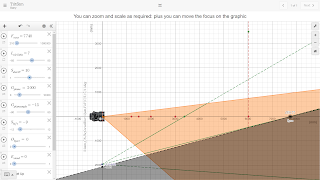 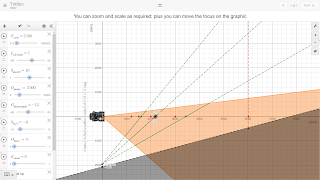 In the above we have shifted down by 9mm, but as we can see, the focus has not changed as the optical axis hasn't changed. However, looking at the LV screen on our camera, the point of focus has changed on the LV screen, ie moved up in this example.

This brings out a new 'rule' for us: If shifting, set tilted focus first, or remember the feature where the non-shifted optical axis intersects the plane of interest, and focus at that point after shifting, then tilt the lens.

Because we have a tilted camera, ie the non-tilted optical axis is not parallel to the plane of interest, we can't make full use of knowing the hyperfocal, as we are focused beyond it.

However, this is where DOFIS supports the TS user. Having taken the first image as above, DOFIS will now alert you when the far/lower DoF ceases to overlap with the currently captured image's near/upper DoF; allowing you to tweak focus until green, rather than, red is shown in DOFIS. In other words, DOFIS depth of field feedback works whether you are tilted or not.

Posted by Grayheron at 3:11 AM