Why pano shooters should stop down

In the last post I alluded to the complication that, in many lenses, the pupil 'plane' is in fact a surface, ie it varies as you move away from the optical centre.

For most photography, eg portraiture etc, this nuance is an irrelevance. That is, over simplifying things, focus on the eye and go from there.

Where the non planar attribute becomes of interest is when one is capturing panoramic brackets. 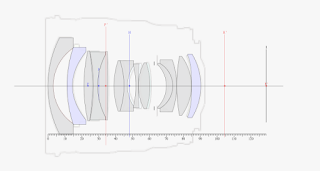 Let's first remind ourselves what the 'problem' is and, as an example, let's take a Canon 24mm F1.4L, focused at infinity. Thanks to https://www.photonstophotos.net we can gain some insight into this, and other, lenses:
On the above screenshot we see the lens positioned relative to the sensor, at a flange offset of 44mm. We also see the two principal points, the two pupil locations and the two focal points. All these 'cardinal points' being on the optical axis.

Let's now switch on the entrance (red) and exit (blue) pupil surfaces and set the lens to it's widest aperture: 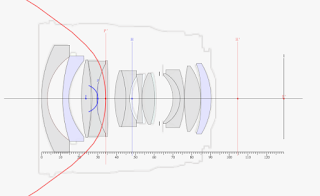 As implied in the last post: not what you might expect. That is, both surfaces, are highly non-planar.

So, the obvious question is: can we reduce the effect, so that the spread of the entrance pupil along the optical axis is minimised?

Most landscape photographers, who are taking panoramic brackets, and have a near point of interest, will be interested to know that, by stopping down the aperture, one can reduce the variability. For instance, taking the same lens as above at f/10, results in the following pupil surfaces:

Thus, by stopping down the aperture, say, to a sensible f/10 , the entrance and exit pupil surfaces have 'collapsed' towards the optical axis and become 'near-planar'. That is, the pupil location, that we can measure or calculate, and which is on the optical axis, is a good measure of the pupil’s location, albeit with some lenses, eg especially very wide or fisheye lenses, the entrance pupil will not be a single point.

Posted by Grayheron at 7:04 AM