Another quick post of one of my 'tabletop experiments, this one showing how, with the help of Magic Lantern and DOFIS, you can easily create complex bracket sets. This one being a three degrees of freedom challenge: exposure+focus+composition.

To illustrate the process, I used my 24-105mm F/4L, at 35mm in portrait mode, mounted on a nodal rail and a pano rotator: 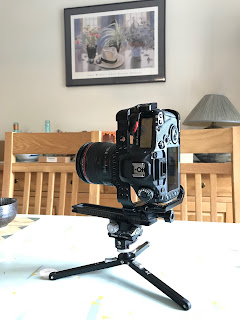 DOFIS told me that the no-parallax point, ie the entrance pupil, was at 83mm from the sensor, which I duly set and checked, ie by quickly rotating the camera on the pano head and confirming all was OK: which it was.

I then positioned the camera for 'composition', and confirmed I would be taking four pano stations.

I then set the base exposure using ML's Auto ETTR, having set an aperture at f/11: giving a shutter of 0.6s.

Finally, I set the nearest focus and noted this figure, so I could reset it for each pano station.

I set full auto focus bracketing in DOFIS and noted it said it would take around 4 backets: in fact it took 5.

I then repeated the following process:

After ingesting the 20 images into Lightroom, ie 5 focus brackets at 4 pano stations, I first 'developed' the Dual-ISOs.

I then did a round trip to Helicon Focus, of the Dual-ISOs from each pano station: thus giving me four focus merged images for pano blending using Lightroom's photo merge to pano feature. 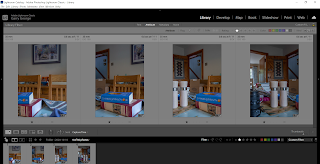 I used the perspective blend, for a realistic look, and the resultant image looked like this: 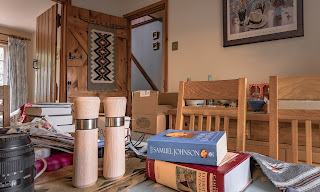 Posted by Grayheron at 3:52 AM