In the last post I introduced my latest ML Lua Script: Tilter. Which I created to support Tilt-Shift lens use, eg a 24mm TS-E L2 in my case. Note the script will need (minor) tweaking for a non 24mm TS-E L2.
As a minimum the script is useful as an, in-camera, education tool, which you can use without a TS-E lens, as long as the lens reports focus, ie dynamically showing how tilt and focus can change a camera’s depth of field.

However, the real power of the script is in how it supports/informs your TSE-E use, mainly in two ways:

It is important to understand that the Tilter is based on the hyperfocal distance (H), and that Tilter shows the side on camera view from the near field, that is from the lens’s (estimated) front principal (ie assuming a split thin lens model), out to 3*H.

Thus, as you change the aperture, Tilter will always show the tilted focus wedge relative to the current hyperfocal. It may look that the tilt angle is changing as you adjust aperture, but, of course, it is not. Only the hyperfocal is changing. The tilt can only be changed by adjusting the lens or refocusing.

Since the first post I’ve added a couple of features, that I find useful.

First, Tilter can now show an estimation of the vertical Field of view of the camera – once again based on assuming a thin lens model. This can be switched off in the script’s menu and, because we are dealing with a lens that can be shifted, the FoV can be based on four sensor ‘sizes’ – in the case of my TS-E 5DIII, two real and two virtual:

You need to explicitly set the sensor configuration in the Tilter’s menu. Note that the FoV shows the full +/- shift cover, which of course requires post processing, pano-stitching to achieve: which, by the way, is easy to achieve in LR.

Second, Tilter now shows an estimate of whether the focus on the ground plane is within the FoV of the above set sensor configuration. This is shown by four dots, whose display, once again, can be switched off. If the dot is red then the focus is behind that particular FoV marker, if green it is in front of that FoV. The left-hand dot represents the widest TS-E setting, ie the 24x60 configuration above, and the right-hand dot is the narrowest (36x24mm) configuration. Once again this can be switched on and off: note is off in this post.

Note that you may be disappointed with this feature as the number of differentiating focus steps that Canon reports in the ‘far field’ is not large. That is, you may see all red or all green dots.

With the FoV switched on, the screen now looks like this: 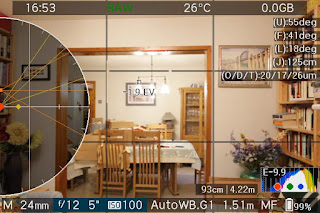 Note that the centre dot, used for focus stacking, is red; as, in this case, no image has yet been taken. Plus we see that all the dots are green in this case, ie focus is set in front of the narrowest FoV. We also see the tilted DoF relative to the FoV.

There are two main use cases for the Tilter, ie beyond the educational one. In this post I’ll cover the non-shifted use case where you wish to ensure the ground plane (near to far) is in focus, but that the vertical field of view, in the near or far field, may not be enough, ie you need to do tilted focus stacking.

Of course, with a tilting lens we have two definitions of ‘the ground plane is in focus’. First we can elect that the lower/far DoF (just) touches the ground plane, as shown here: 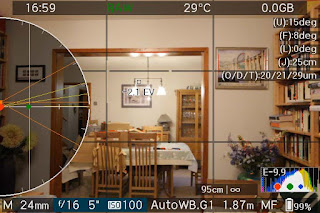 Secondly, we could elect that the plane of maximum sharpness (‘zero’ optical blur) aligns with the ground plane, as shown here: 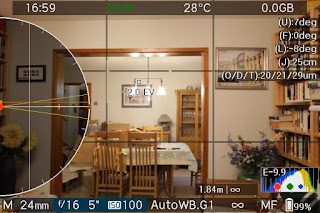 One use case is that I’m seeking to ensure the ground plane is tack sharp, ie the tilted plane of maximum sharpness is coincident with the ground plane. In addition, the lens is set up to be parallel to the ground plane, ie no additional angles to worry about.

Step 1: focus the TS-E lens using whatever method you like, eg some like setting a closed down aperture, ie F/3.5, and iteratively bending for the background and focusing for the foreground – followed by opening the aperture to the required shooting configuration and setting the exposure. With Tilter you can also estimate the height that the centre of the lens is away from the ground plane and use the Tilter menu to help you approximate the initial tilt angle. In this case, my 5DIII was about x mm above the table top, so Tilter helped me estimate that the initially set tilt should be y degrees. I then used the iteration method to arrive at the final tilt-focus settings and this first image, which could have been an exposure bracket set:

Step 2: using the on-screen Tilter image, assess if the DoF is enough for your needs. That is all the things you want to be ‘in focus’, ie not outside of you defined CoC focus criteria, are in focus. If they are, you’re done! Also, note that the centre dot of the Tilter feedback is now green, indicating that the current focus is overlapping the last taken image: which of course it will, if you haven’t yet refocused.

Step 3: Assuming not everything is covered by your single image, you now need to use tilted focus stacking to achieve a greater DoF coverage. Without Tilter this would be difficult to impossible, as you would not know how much to refocus to achieve an image to image focus overlap. As we are focus stacking from the ground plane, all we need to do is to refocus towards the camera, ie away from infinity, and watch the focus stacking feedback in Tilter. That is refocus towards away from infinity until the centre dot turns red, then (nudge) refocus towards infinity until it just turns green again. On the RHS of the Tilter screen you also have some data to help you out, ie angles and the optical blur (set in the ML menu), as well as the diffraction blur and the convolved total blur, ie at the depth of field (angular) planes. Take your next image and re-evaluate the situation in Tilter, ie have you covered your needs yet? If not repeat Step 3.

To further help with tilted focus stacking, it is often useful to know the angle of the highest object you wish to see in focus. You could guess it, but a better approach is to use some technology. For instance, I use the Theodolite app from http://hrtapps.com/theodolite/ 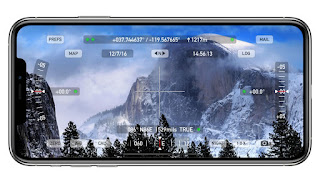 Once you have taken your image data, all you need to do is post process your images, eg:


In future posts I will look at other use cases and, hopefully, provide some real world examples.

As usual I welcome feedback, advice and, in this case, any Tilter development suggestions.
Posted by Grayheron at 8:53 AM