For those that seek to achieve ‘deep focus’ in their photography, ie from very near to infinity, you know that wide angle lenses are your friend. For example, an IRIX 11mm lens on a Full Frame camera, with an aperture set to f/10, with have a hyperfocal distance (H) of around 1.1m, at an infinity defocus blur of 11 microns. This follows from the Rule of Ten, where the hyperfocal is simply FL/10, when the circle of confusion, in microns, is the focal length (FL) in mm and the aperture is f/10.
Such a single image set up will provide a very high-quality focus over a deep focus field, ie less than 11 micron defocus blur, between 550mm (H/2) and infinity

But what if there was a feature you needed to include in the focus at, say, 150mm? The simple answer is you couldn’t achieve this in a single image and maintain focus quality through the scene.

This is where multi-image, deep focus techniques come into play, ie focus bracketing.
One of the challenges with multi image focus bracketing, apart from the wind, is knowing where to focus from image to image.

At the simplest level, for perfect focus bracketing, one would focus at H, H/3, H/5, H/7 etc. Thus, with four images, where H/7 being the shortest with a near and far depth of field at H/8 and H/6, the merged, focus stacked, depth of field will cover from H/8 to infinity.

Of course, knowing distances in theory is fine on paper, but not much help in the field. So, as usual, Magic Lantern to the rescue; all assuming, of course, your lens reports focus distance etc. If it doesn’t, you are out of luck!

Over the years I’ve experimented with various ways of getting focus feedback using ML. I’ve tried automatically moving the lens, which has got better as Lua has matured (thanks to a1ex at ML); plus I’ve tried various Focus Bar arrangements that provide visual feedback to the user.

Although I like my latest focus bar (DoFBar), the down side is its (LV) readability in the field, especially without a hood/shade in bright sunlight. Plus, I (over)loaded it with features: that is, it’s just too complicated.

Last month I released my latest auto focus bracketing script (GFBS), which, IMHO, runs well: at least on my 5D3. Today, I’m releasing the latest version of my focus bar, that I’ve simplified, and targeted 100% towards deep focus photography and in-field (LV) viewing.

I’m calling this script the Bracketeer; and you can download it from the link on the right.
I believe the Bracketeer does three things rather well:


The script uses the ML-set circle of confusion as the overlap (defocus) blur criterion. For a full frame I recommend this be set around 20-30 microns, and crop scaled on an APS-C camera. The script can be tweaked for IR, ie use a frequency in the script of 0.850, say, compared to 0.550 for a visible band camera.

The script has a simple menu, ie its either on or off; and it can be used in any direction, ie near to far or far to near.

The following illustrate the UI and show traffic lights in action. 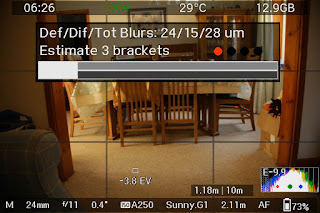 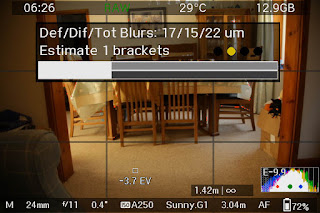 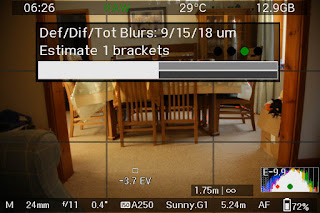 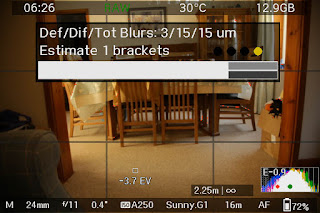 In the above we see the point of focus moving through the red, yellow to green states of focus. We also see the blur information changing. The final yellow traffic light warns us that we are now focusing past 4*H. If we were it infinity, this traffic light would show white.

The full focus bracketing (bar) feedback only kicks in once an image has been taken. Before an image has been captured the top and bottom bars show the current focus info relative to the focus state at the script’s start up, ie time zero.

The following screen captures illustrate the two bars in action. The red ‘zone’ showing a focus gap. The left hand side of the bar display is positioned at the minimum of the two near depths of field. The right hand side is positioned at either H, if one of the bars far depth of field is greater than H, or at the maximum of the two bars’ far depth of field if both are less than H. 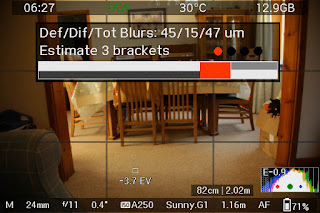 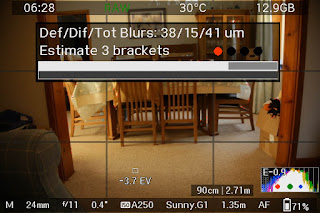 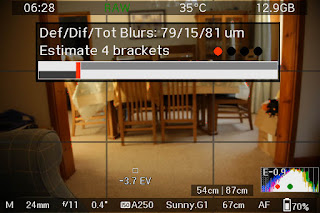 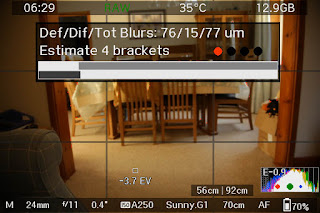 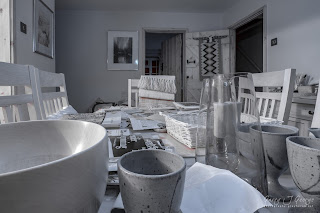 Rather that drone on about the script, I will leave those with a curious mind to try it out (remove any of my old/legacy scripts). As usual I welcome feedback of any kind, especially how to make the script better.
Posted by Grayheron at 12:49 PM