What would we do without Live View?

[Note I've updated this post to be clearer about the Magic Lantern advantage]
As part of the process of (re)acquainting myself with my 24mm TSE (tilt/shift) lens I decided to remind myself how to use the tilt function: thanks to Austrian army Captain Theodor Scheimpflug, who used it in devising a systematic method for correcting perspective distortion in aerial photographs. Plus is was an indoor day as it was cold, wet and sleety outside.

As we know a lens that tilts allows us to control the plane of focus and move it away from being orthogonal to the axis of the lens. Although there are ways of setting the tilt, based on calculations, a far easier approach is to use the live View screen.

The test scene was a row of our cat’s toys, which she then decided to take an interest in: so I had a live model as well.

The objective was to get everything tack sharp from the near to the far: something that would be near impossible with a normal 24mm lens.

After I had angled the lens axis down by about 30 degrees, thanks to my geared head, I set about the (Magic Lantern enhanced) focusing process, namely:
In the end I needed about 3 degrees of tilt, but because I was using the LV process to set focus, the angle became irrelevant. As for focus, I was at about 1.3m according to my lens reporting, thanks to Magic Lantern.

Here’s the final proof, ie that the TSE lens is an incredible tool: thanks Polly :-) 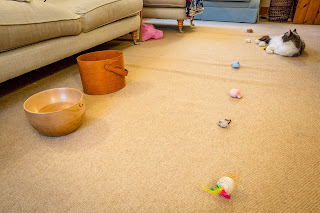 Posted by Grayheron at 6:58 AM