Magic Lantern does it again!


Note: following further testing I've tweaked the report below, as (0%) ETTR seems to work fine with the 4K experimental FRSP.

Last week, on April Fools’ Day, A1ex over on the Magic Lantern forum announced another ‘game changing’ addition to ML: namely 4K video: albeit only on the 5D3.

At first, as a 5D3, non-video, photographer, I wasn’t that excited, until I saw that in addition to all the sexy video stuff, this latest development, which is still at the experimental stage, contained a feature to allow silent, full resolution live view (5796x3870) DNG capture at shutter speeds faster than the current FRSP. Thus, the new FRLV, together with FRSP, will allow silent image capture from the fastest shutter speed to around 15s.

Silent, meaning no mechanical shutter action, results in a truly silent DSLR, ie no mirror or shutter noise. Think of the use cases, eg in the middle of a church service or a concert.

At the moment ML has a full resolution silent feature, but the fastest shutter speed is about a 1/4 second. The 4K developments appear to eliminate the shutter limitation, albeit with a ‘rolling shutter’ limitation of about 0.128ms. This means that you will/may see strange geometry distortions in fast moving objects that stretch over a large part of the sensor, eg helicopter rotor blades.

As I say above, it’s all very experimental at the moment, but stable enough for testing. As an example of what is to come, I went and took a test shot in our garden. I used an exposure of F4.5, 1/1000s at ISO100! This exposure was simply not accessible to silent before.

I captured the test image as a DNG (at this stage no EXIF data is recorded), and ingested into Lightroom. I used a linear camera calibration preset I had previously set up via Adobe DNG Profiler, which I believe helps extract the highlights, and ‘played around’ with a few LR sliders. The resulting silent, full resolution image looks like this: 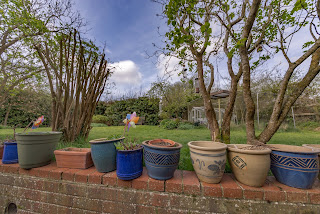 This is all very exciting stuff and once (hopefully) A1ex and the gurus at ML get it all working together, we will have full resolution silent photography working with Dual-ISO, ETTR, Auto-Bracketing and accessible in Lua. So expect the price of used 5D3s to start going up!

As things develop over at ML I’ll continue testing and posting.
Posted by Grayheron at 3:20 AM