Although I have a Canon TS-E 24mm ( http://www.canon.co.uk/lenses/ts-e-24mm-f-3-5l-ii-lens/ ), I don’t use it very often; despite being one of the best lenses I have from a quality, distortion and CA perspective. So my Easter treat has been re-acquainting myself with one of my most expensive lenses: some GBP1700 on Amazon (https://www.amazon.co.uk/Canon-focal-length-12mm-Shift/dp/B001TDM7DA).

First I decided to reread a few articles on the Scheimpflug principle and the hinge rule, which can be read about here: http://www.trenholm.org/hmmerk/

Thanks to Harold Merklinger we also have this diagram: 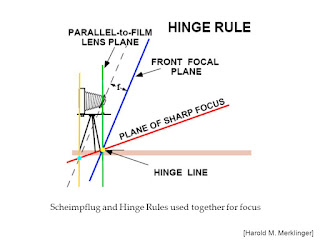 Having read about the ‘maths’, I thought I would do some virtual experimentation first. Having tried various Apps I can recommend three that really allow you to play around with all the Tilt variables.

The first is a web page with an interactive interpretation of shift: http://www.cambridgeincolour.com/tutorials/tilt-shift-lenses2.htm

The second is an online App and a great visulisation tool by Tim Parkin at http://static.timparkin.co.uk/static/dslr-tilt-shift/

Finally, as far as iOS Apps are concerned, I think the best and most powerful, for both normal depth of field and tilted DoF calculation and visualisation is LumariverDoF: http://www.lumariver.com/#LumariverDoF

For me, although the LumariverDoF interface is a bit intimidating at first, once you ‘work it out’, this App allows you to experiment with tilting, all from the comfort of your own sofa!

Once I had re-acquainted myself with the theory, I put it all to the test with a simple table top example.

From experience I knew that a ball head was not the ideal tool to use for tilt & shift work, as it is exacting work and ball heads don’t come with vernier control. So I turned to my Manfrotto geared head ( https://www.amazon.co.uk/Manfrotto-410-Junior-Geared-Head/dp/B000JLI4Q2 ) 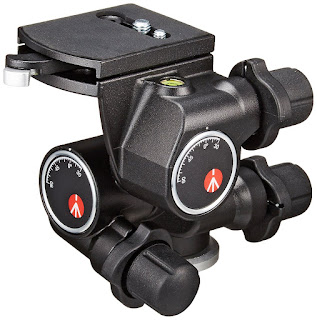 As for focusing the tilt-shift lens, the ‘secret’ is to use Liveview and iterate to a focus solution.

For the test case, I simply placed a magazine on the dinning room table, with the desire to have the cover of the magazine in focus at an aperture of F/3.5! Normally (no tilt) such an aperture would result in a very narrow depth of field, eg focusing at about 50cm on the bottom of the book, meant, at the CoC I was using, the near and far DoFs were 46cm and 54cm: not enough to get all the magazine in focus. 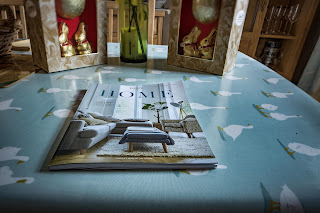 Bottom line: once you understand the basic principles of the tilt/shift lens and played around with the visualisation apps, using this incredible piece of glass technology is both rewarding and fun.
Posted by Grayheron at 6:39 AM