An Evening with Will

“Well, God give them wisdom that have it; and those that are fools, let them use their talents.”

In the last post I talked about our local National Trust property: The Vyne. On the day I last visited it never stopped raining: so I was a little apprehensive this Saturday as we had tickets for the outdoor production of Twelfth Night at The Vyne: put on by the (modern) Lord Chamberlain Men. William Shakespeare worked as actor and playwright for nearly a third of his career for the original company.

The Lord Chamberlain’s Men’s web site (http://www.tlcm.co.uk) says the original all male company was formed at the end of a period of flux in the theatrical world of London, it had become, by 1603, one of the two leading companies of the city and was subsequently patronized by James I and renamed The King’s Men.

The company was founded during the reign of Queen Elizabeth in 1594, under the patronage of Henry Carey, 1st Baron Hunsdon, the then Lord Chamberlain, who was in charge of court entertainments. After its patron's death in 1596, the company came under the patronage of his son, George Carey, 2nd Baron Hunsdon, for whom it was briefly known as Lord Hunsdon's Men until he in turn became Lord Chamberlain in 1597, whereupon it reverted to its previous name.

For most of its life, the company was one of the most prominent of its day, favoured by commoners and aristocracy alike – indeed The Lord Chamberlain’s Men was often invited to perform at Court, and records show that Queen Elizabeth I preferred them above all other companies. Such was the enthusiasm of the next monarch, James I, he even agreed to grant the company Royal Patronage.

The original company began life at a playhouse called The Theatre, northeast of the City of London. The owner of that land, however, had become firmly opposed to letting plays continue at The Theatre, and thus the company entered the late 1590s without a regular playhouse, though records indicate that they performed at the Curtain Theatre in Shoreditch while planning a permanent home. This situation changed when the company leased land in Southwark and, taking the framing timbers from The Theatre, constructed the now world-renowned Globe Theatre.

Luckily the rain held off and we were rewarded with a great production and a great sunset. Although I limited my photography, for obvious reasons, it was an opportunity to snatch a few shots of the actual performance, using my Sony 6000, without flash :-)

This first image is a handheld , three image, pano, taken at 18mm, f/6.3 and 1/100s. Processing was initiated in Lightroom, and I used the LR new pano feature. I have more to do in post to correct the 'pano distortion'. 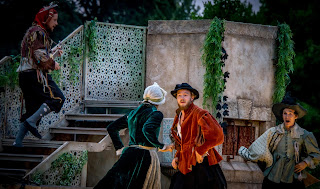 And of course you must have a shot of Malvolio in prison. 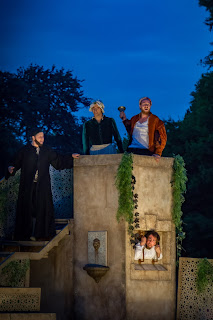 Finally, in addition to the play, we were rewarded by a lovely sunset. 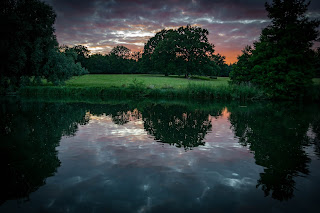 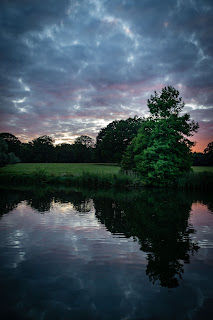 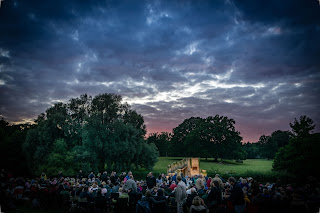 Overall I remain impressed with the Sony A6000. It has good low light capability and a ‘low profile’, that doesn’t shout ‘professional camera’, so it can pass scrutiny in certain venues that would not look kindly on a ‘larger’ DSLR.
Posted by Grayheron at 12:28 PM