The Story of an Image

This is the first post of a series of posts that try and tell the story of an image. Each post will show the in-camera RAW (JPEG version) and the final image.

Last year I was fortunate enough to travel back home to Albuquerque, from Salt Lake City, with a few business colleagues. This gave the chance to visit some of best National and State Parks in the US. One of the first stops was the Dead Horse Point State Park in Utah, which overlooks of the Colorado River and Canyonlands National Park.

The park covers 5,362 acres of high desert at an altitude of 5,900 feet. The plateau is surrounded by sheer cliffs 2,000 feet high with only a narrow neck of land 30 yards wide connecting the mesa to the main plateau. Thus it was easy for cowboys to simply fence off this narrow neck, and keep rounded up wild horses from running away.

There are many stories about how this high promontory of land received its name.

According to one legend, the point was used as a corral for wild mustangs roaming the mesa top. Cowboys rounded up these horses, herded them across the narrow neck of land and onto the point. The neck, which is only 30-yards-wide, was then fenced off with branches and brush.

This created a natural corral surrounded by precipitous cliffs straight down on all sides, affording no escape. Cowboys then chose the horses they wanted and let the culls or broomtails go free. One time, for some unknown reason, horses were left corralled on the waterless point where they sadly died of thirst within view of the Colorado River, 2,000 feet below.

On this trip I had decided to only use my IR converted Canon 50D, with a 720nm conversion. The base image was taken on a tripod at ISO 100, F/7.1 and at a shutter speed of 1/40 sec as set by Magic Lantern's ETTR exposure option. I tend to not worry too much about white balance, as I’m shooting RAW, but I usually use a custom WB that I have set off of live grass. The base image looked like this: 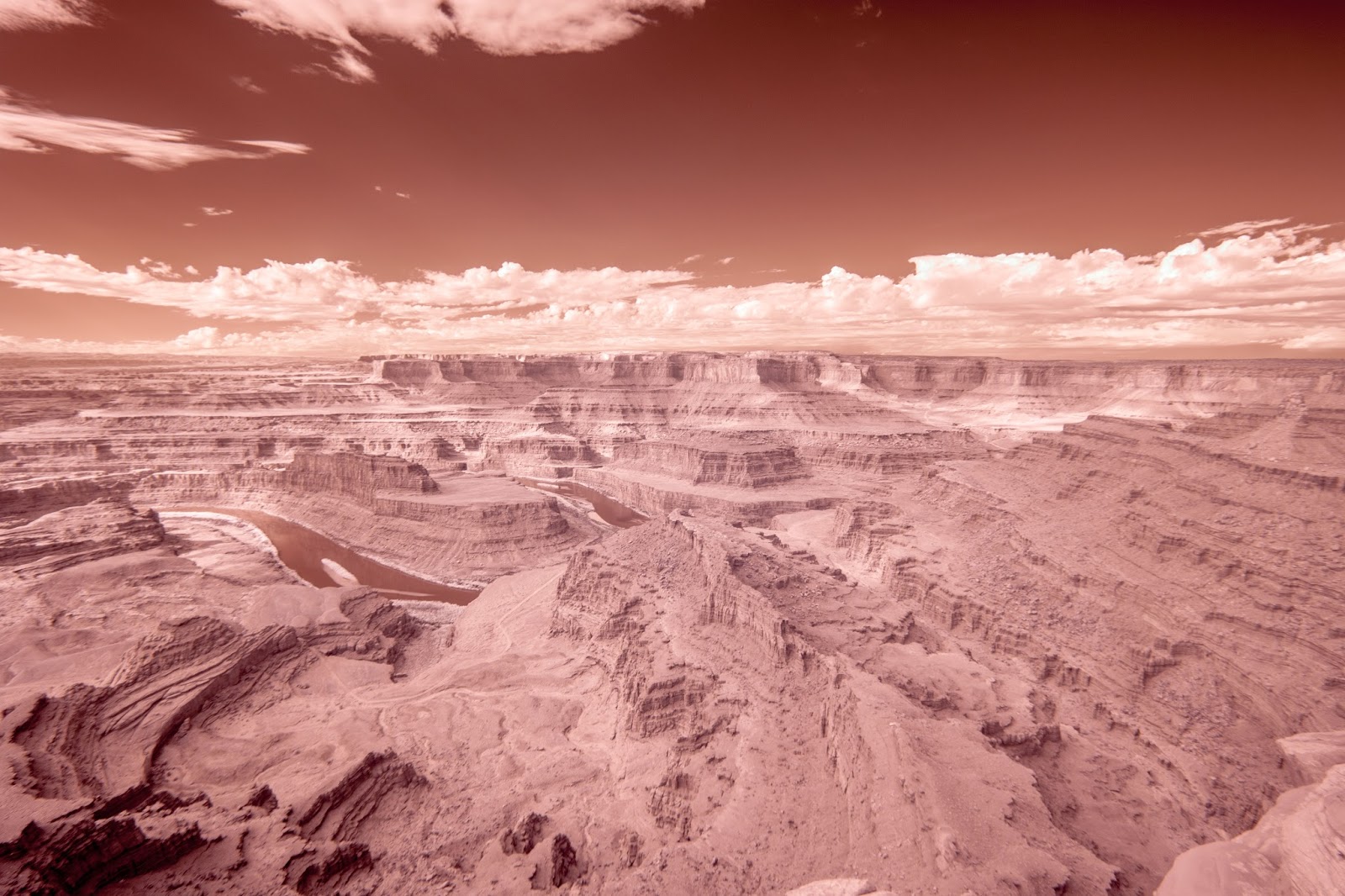 When processing IR images I tend to favour monochrome processing, when I would make full use of Nik Silver Efex Pro II. On this occasion, however, I decided to use a ‘colour’ processing workflow, which went like this: 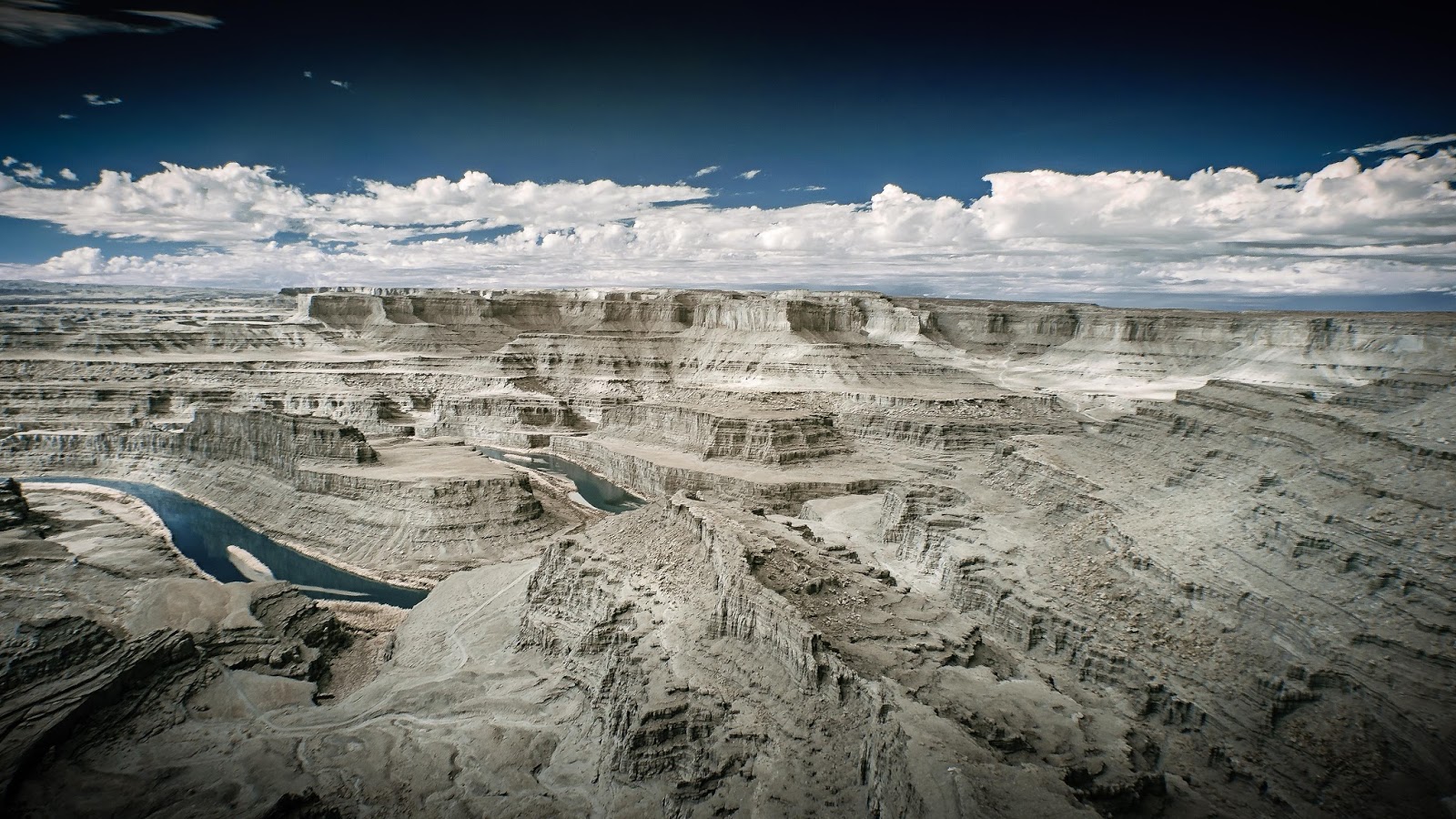 And here is another image of Dead Horse Point created using the above workflow: 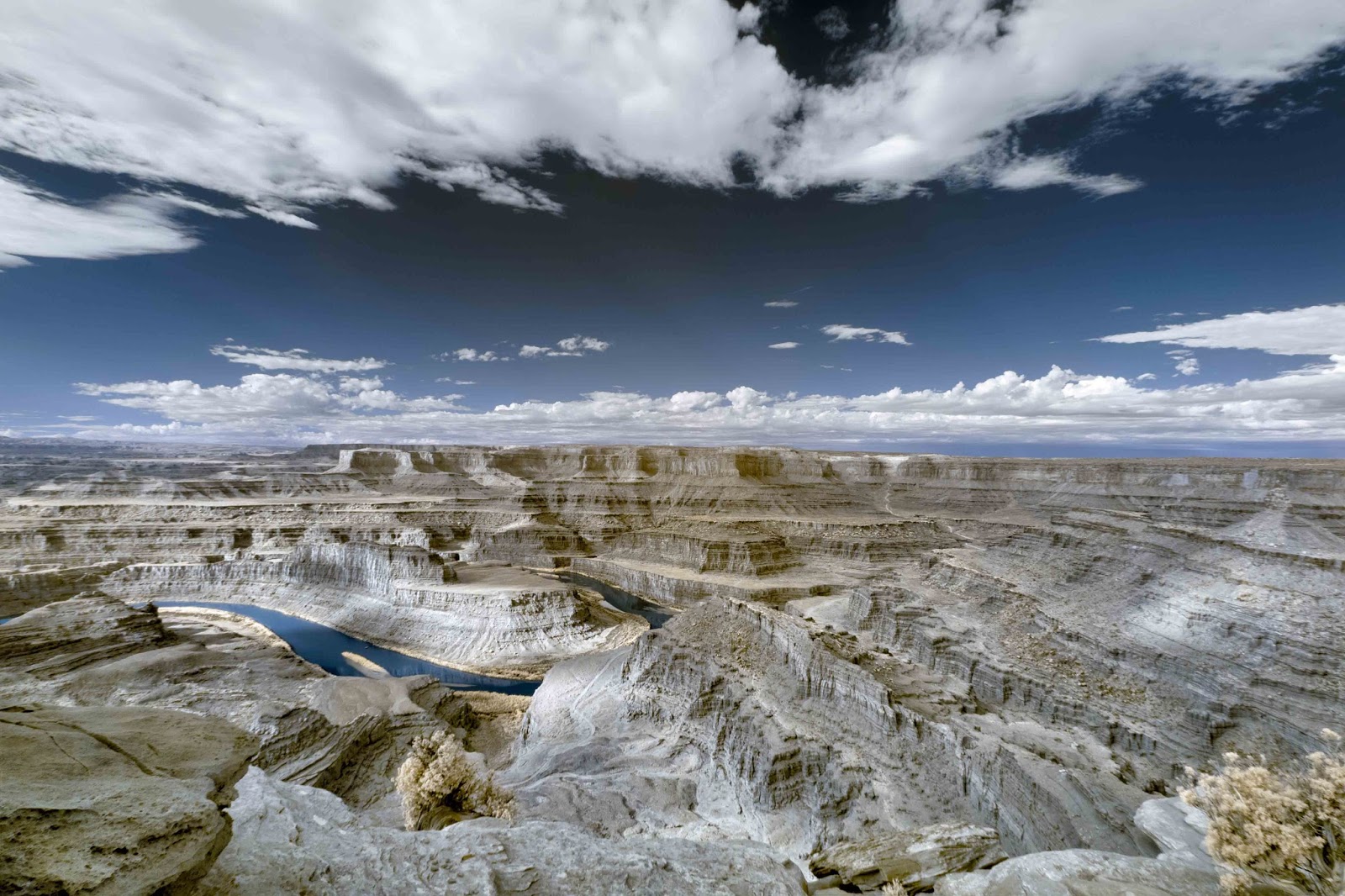 As can be seen above, the IR converted 50D provides an alternative view of the Colorado River’s red rocks. Creating ‘faux colour’ images, with natural looking skies, is a relatively simple process, thanks to a simple channel swap in Photoshop and the fantastic TK Action Panel.

Posted by Grayheron at 1:19 PM