Some early thoughts on tilt-shift photography

Like many photographers with a technical background I continue to have a fascination for the science and mathematics behind photography. The web, of course, including wiki, has provided much insight; as has a few well written books, eg http://www.amazon.com/Science-Curious-Photographer-Introduction-Photography/dp/1568815816


Thus it will be no surprise to learn that before I purchased the Canon TS-E 24mm F/3.5L II tilt+shift lens I had read and read and read about how to use this ‘technology’.


Much of the tilt+shift reading is, obviously, directed at view or technical cameras; and, like many, my first insight was provided via Harold M Merklinger’s excellent (e)book: “Focusing the View Camera – A scientific way to focus the View Camera and estimate Depth of Field”; which is freely available on line.


Initially it was all very confusing, but soon, after playing with the lens on my 5DIII and ‘seeing’ what tilting and shifting did for an image, things began to fall into place. Worrying about Scheimpflug lines was soon put in the background and into the foreground popped a simplified understanding that now allows me to use the TS-E with (relative) confidence.


For those that don’t know what a Canon TS-E lens looks like, here is the 24mm version I have. 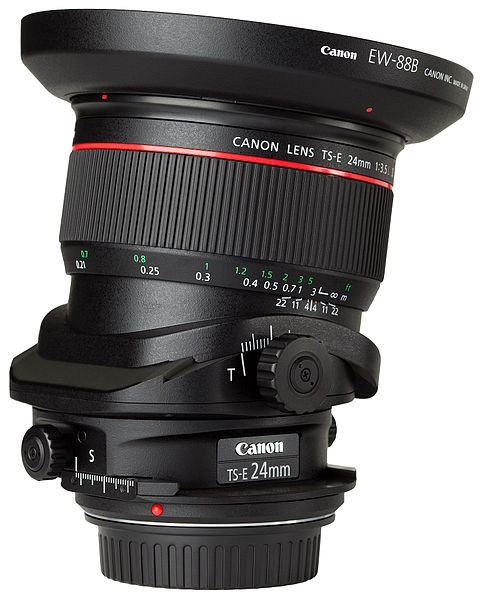 At first sight it looks a bit of a beast; certainty when compared with the relative simplicity of a ‘normal’ lens arrangement. In addition to the tilting and shifting, the lens allows independent rotation of the shift and tilt ‘surfaces’. A further complication is that the lens has no auto focus and that accurate exposure metering is only possible when the lens is not tilted or shifted.


So what have I concluded after all my reading and experimentation?


First ‘all’ you need to be aware of the so-called hinge distance (J), which is the point around which the plane of sharp focus rotates. For example, the following sketch is taken from one of Merklinger’s PDFs: 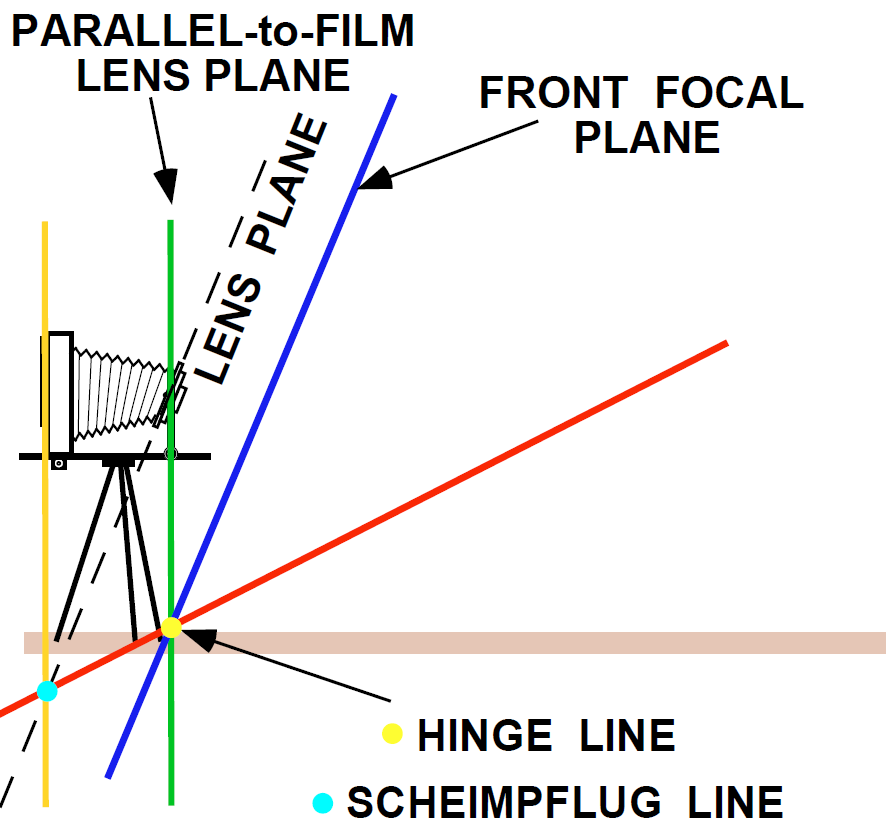 Second, the hinge distance (J), for most landscape work, may simply be recognised as the distance from the camera/lens to the ground (or some other plane that you wish to see in focus).


Once again thanks to Merklinger we have a simple chart to illustrate this: 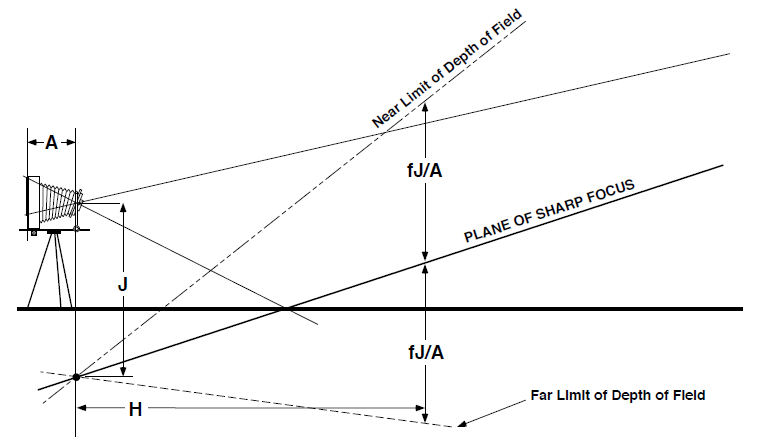 
For those that wish to try out a tilt-shift simulator, I recommend ‘playing’ with this one: http://static.timparkin.co.uk/static/dslr-tilt-shift/


Third, for anything other than close up (macro) shooting, we can ignore the fJ/A complexity and simply substitute J. In other words, at the hyperfocal distance (H) of the lens, the far and near limits of the depth of field are simply J (more on J this below).


As most photographers know, as a first order approximation H may be estimated from FL*FL/(N*CoC): where FL = focal length, N is the aperture and CoC is the circle of confusion at the sensor plane. For the 24mm TS-E, using a combined defocus/diffraction, 5DIII-based, ‘CofC’ of 0.02mm and aperture sweet spot of F/8, the estimated hyperfocal distance is about 3.6m  or just under 12ft, ie just short of twice my height.


Thus, if I was on a tripod at eye level and wish to set J to the ground, ie about 6ft, then at H ft away from the camera, ie twice my height if we use the above settings, the depth of field would be about 6 ft either side of the plane of sharp focus, but orthogonal to the camera axis. Knowing this helps the photographer gauge the size of the focus wedge that is associated with the 24mm TS-E at a specific H and J. For instance, if I used the TS-E at its widest aperture (F/3.5), the hyperfocal distance (H) would be about 27ft away, but J would remain the same (unless I changed the tilt). For completeness, at F/11 H would be about 8.5 ft; and at F/16 it would just be just under 6ft, ie about J, thus creating a focus wedge of about 45 degrees either side of the plane of sharp focus (if I rotated the plane of sharp focus parallel to the camera axis: more on how to do that below).


Fourthly, the tilt angle for a tilt-shift lens, where the tilt is limited to small angles, may be simply estimated from 9/2J, where the tilt angle is in degrees and J is in ft. Thus, if I wish to position my hinge point at 6 ft below my camera, ie at tripod/eye-height, I would use a tilt angle of about 9/(2*6) degrees, ie 0.75 degrees.


Summing up: the tilt (9/2J) positions the hinge and focusing rotates the plane of sharp focus around the hinge.


To help cement the above, here is a simple illustration:


It’s as simple as that!


In future posts I will elaborate on the shift functionality of the TS-E lens. For now, I can safely say I feel comfortable being able to ‘tilt to tack sharpness’!

Posted by Grayheron at 9:12 PM