By way of an experiment and a bit fun, I thought I would treat myself to a rather bulky ‘caplens’ for my EOS R.

Rather than buy something like the Funleader 18mm F8.0 CAPLENS, I decided to go with the slightly larger AstrHori 18mm F8 Full-frame Wide-angle Shift Lens. Yes a shift lens: 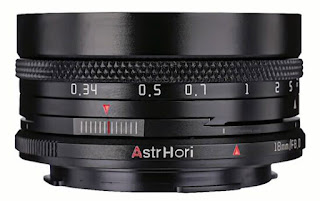 In the above we see the focus scale and the +/- 6mm of shift.

As this is a cheap lens, there are two weakness that need to be recognised.

The first is only visible when you attempt to use the  maximum 12mm of shift: +/- 6mm. Clearly the lens elements are only designed for an APS-C image: 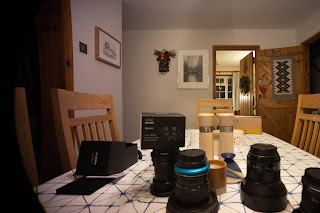 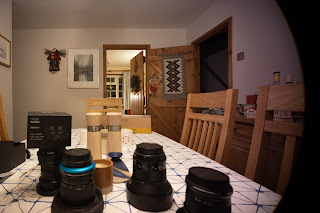 The other weakness is clear if you look at the lens focus ring: there is no depth of field scale and this is a fully manual lens, with no electronic connection to the camera.

But, as we have seen in the last few posts, we can easily construct our own depth of field scale and, in fact, can create it in a rather interesting way, as the lens has a fixed aperture, which allows us to construct the DoF scale with respect to blur in microns, ie circles of confusion.

Marking out the scale on some masking tape results in the following DoF scale hack: 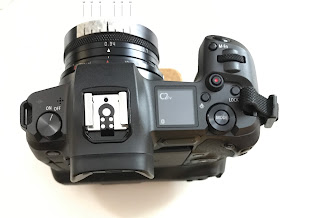 Using the scale is no different to using an aperture based depth of field scale. Namely, select the DoF criterion you wish to use, ie the CoC. In the example below I used 20 microns, focus on the nearest object of interest,  the minium focus in this case, capture an image, and rotate the focus, using the 20 micron marks, taking images and repeating, until you reach infinity.

The following is a four focus bracket test capture set I grabbed on my dining table:

So, there you have it, a cheap shift lens that can be made better with a bit of masking tape.

As usual I welcome any comments on this post, or any of my posts.

Posted by Grayheron at 2:07 PM