As readers of my blog know, my scripts are biased towards wide angle, deep focus and high dynamic range scenes. That is scenes that require complex image capture bracket sets that benefit from scripting.

Although I have several EOSMs, which run scripts under Magic Lantern, and an EOS R, which doesn't yet run ML, my current photography is directed towards the CHDK cameras I have, and in particular the M3 and EF-M lenses.

The latest release of Quasi Depth of Field Script (QDFS), which may be downloaded from the right, now includes several features that are directed at the landscape photographer. For instance, the script will:

The following screen captures illustrate the above. 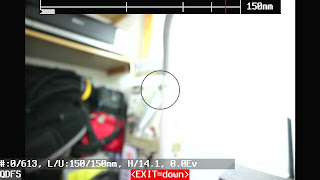 In the above we see a typical script start up view. The focus has been set to the camera's minimum focus, in this case 150mm with the 11-22mm lens, We also see DoF scale shows us where the hyperfocal is (red line), and highlights fractions of the hyperfocal, ie H/2. H/4, ...H/32 and the minimum focus. We also see in the console area at the bottom that the total lens rotation count to (data) infinity is 613 and that we are at 0, ie minimum focus.. The display also shows the Canon reported focus, ie the lower and upper values that Canon is reporting at the current focus. As we are at minimum focus, we are well away from the hyperfocal, ie at H/14.1. Finally, as we haven't yet changed exposure, the delta Ev reading is 0Ev. 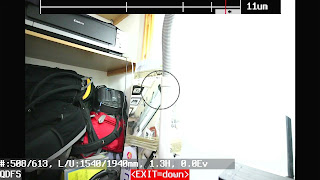 In this next screen grab we see focus has been moved to beyond the hyperfocal and that QDFS now displays the infinity defocus blur in microns, 11 microns in this case at about 1.3 x the hyperfocal, as opposed to the focus distance in mm. Although not shown here, toggling the INFO button will allow you to display the Canon histogram.

As we are overexposed, it is a simple matter to press the RIGHT button and let QDFS set an ETTR exposure for the highlights, as below: 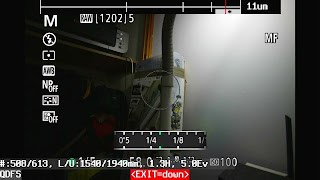 Here we see that the exposure is 5Ev from the initial exposure and at this point we press the Canon shutter, to create a reference point: 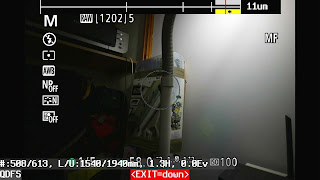 In the above we see the delta Ev has been zeroed and that the current focus, and DoF, is shown above the QDFS central scale. This reference will remain in place as we refocus, thus allowing us to return to the last focus position, as shown below: 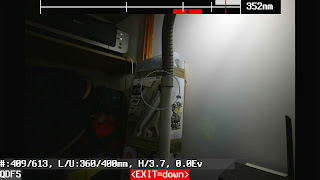 In the above we see the DoF reporting is red, indicating our current focus position has a focus gap relative to the last image or, in this case, the last referenced focus. We also see that QDFS is reporting we are at 352mm from the sensor plane, whereas the Canon upper and lower reporting is 360 and 400mm. So who is right? Well neither. Canon is giving us a range, where as QDFS appears not to be inside the Canon range, although is very close. For non macro DoF setting we are good enough, remember we are using a thin lens model for a complex lens design that we don’t know; but if you wanted to recalibrate you could, by moving focus until the Canon value just changes and then press the SET button. You can also tell QDFS what distance you wish use for calibration at start up, ie H, H/2 or H/3.

The final thing to show is that we can easily return to our referenced focus (yellow) and then press the LEFT button to set an ETTL exposure: 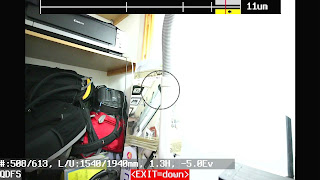 I hope landscape photographers see the value/power of the script and in future posts I'll provide insight into the QDFS and LBS scripts with real information from the field.