I know that not everyone likes infrared photography, I think mainly because of the many 'false colour' images that are published.

Some have called IR photography rather Marmite like: you either hate it or love it.

However, as I've said before, IR is your friend during the mid-day period and if the skies look 'dead': like today around noon, when I snapped this test image in our garden.

In the visible bands the sky was white and rather flat. But in the IR the sky was incredible.

Here is the test image: 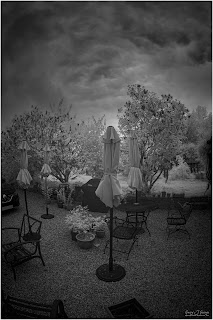 As for post processing, this was accomplished in Lightroom, using a couple of presets that I had set up to exploit the new adaptive filters.

For example, I have a preset called Sky & Ground. One press of this preset creates two masks: one for the sky and one for the ground, with the masks adapting to each image: thank you Adobe.

I then toned the two masked areas and the overall image, for example, using the HSL sliders as well as the calibration sliders.

It’s not a work of art, but it shows what IR can accomplish, when a visible band image simply wouldn’t work.

As usual I welcome any feedback on this or any of my posts.

As a further example of what can be achieved, the following test image was taken with the IR converted EOS M attached to an Irix 11mm lens, locked at its f/8 aperture, via the lens twist trick, and attached to a Rhinocam Vertex adapter, that allowed me to capture a 5658 square pano image after cropping, ie some 32 Mp. 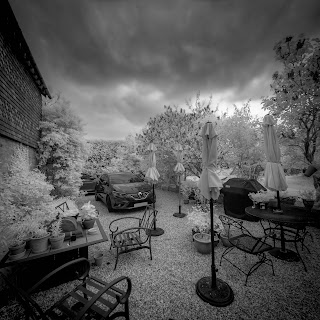 Posted by Grayheron at 4:55 AM