In the last post I introduced the LE/NR and Super-Resolution features in the M3 Landscape Bracketing Script. As a result of some testing, I've refined/simplified the UI.

The top half of the menu now looks like this: 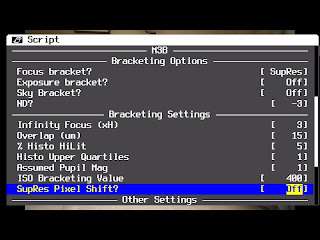 Here we see that a Super Resolution bracket set has been requested under the Focus Bracket? menu item. The number of super-res images to be taken is now defined via the negative ND feature. A -3 value, as above, takes the script to take 8 images. A -5 value would result in 32 images.

There are now two focus move options that attempt to introduce image to image pixel dither. In the above Off is shown, meaning that no focus dithering will be attempted, ie the super-res bracket set 'just' captures the required number of images for either LE or NR post processing. 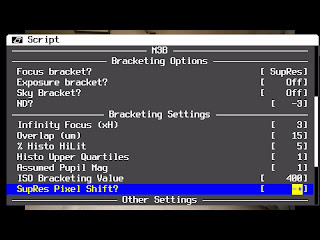 In the above we see that the -+ scheme has been selected, which will adjust focus either side of the point of focus, ie half and half. Each time adjusting focus towards infinity, having first re-positioned away from infinity.

In the ++ scheme, shown below, focus differing is attempted from the point of focus, towards infinity. As stated in the last post, pixel dithering via refocusing is not a guaranteed approach, however, if the angle of view doesn't change, at  least you will have a LE/NR bracket set. 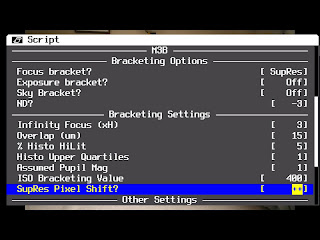 As a reminder, the UI looks like this, ie giving you constant focus feedback until you run a focus bracket set: 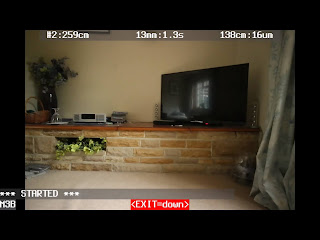 In the above we see that the console option is switched on, thus giving feedback from the script. This option can be disabled if required.

In this above, the top bar shows:

As implied above, the noise reducation or long exposure bracket set operates in a similar way to that of the super-res one: but in the LE/NR case focus is not changed at the LE/NR bracket set is captured at the 'infinity' focus position, as is the sky bracket, ie after focus bracketing.

Posted by Grayheron at 7:09 AM