Putting composition and artistic post processing decisions aside, as these are down to the individual and personal interpretation; there are two aspects of taking a 'scape image, ie sea, city or land etc, that are not open to much interpretation:

We will ignore the 'trivial' situation where both the above are covered in a single image, as the more interesting and challenging situation is when we need to bracket our image capture, potentially both in focus and exposure.

Of course, this is why I wrote the M3 Bracketing Script, which gives you (in camera) manual and auto means of capturing focus and exposure brackets.

Both focus and exposure bracketing require some user input: for example where do I start bracketing, how much do I adjust between brackets, and when do I finish bracketing.

Once again the M3 Bracketing Script is there to help you.

If you are focus bracketing, simply focus on the nearest object that you wish to see in focus, and the script will tell you how many focus brackets will be required to cover from your current focus position to the hyperfocal. Knowing this you therefore know that you will take at least this number of images, ie you will likely also wish to take an infinity focus shot. The focus brackets may be captured manually, with the script telling you where to focus, or automatically, with the script driving the lens.

If you are exposure bracketing things are potentially a little bit more complicated as you need to know your base exposure, say for the shadows, as well as your final exposure for the highlights.

But, once again, the M3 Bracketing Script comes to the rescue with its 'Exposure Survey' feature, which can be switched on in the script's menu.

Once the Exposure Survey mode is enabled, when the script is running in ALT mode, you will see an 'Ev exposure value' in the middle of the bar. For example, at script start up you will see 0.0Ev, as no change to the exposure has occurred yet: 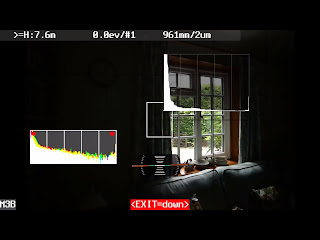 The above shows the M3B info bar at the top (artificially offset to the left in this HDMI screen capture), telling us that we are focused beyond the hyperfocal (>), at 7.6m, and that there is, obviously, one (#1) bracket to get from where we are focused to the hyperfcal. We see the 0.0Ev displayed, as we haven't yet adjusted exposure. Finally, on the right, we see the near DoF is at 961mm and the infinity defocus blur is 2 microns.

Note that I personally display both the Canon and CHDK histograms, but put the CHDK histogram in auto magnify and log mode, with highlight and shadow warnings switched on.

We can now explore the exposure range by simply setting the shadow exposure we wish to use by using the histogram: 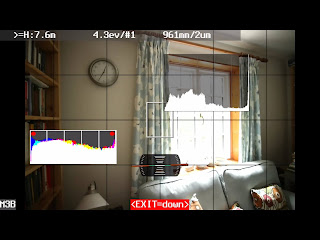 Once this exposure is reached, we now need to 'zero out' the script's Ev setting by doing a half shutter press: 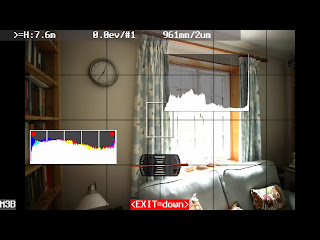 With the script's Ev 'meter' now zeroed, all we need to do is to request the script to set an ETTR exposure, which is simply done by pressing the RIGHT button. Once pressed the script will automatically adjust the exposure until an the ETTR criterion is met. The ETTR settings may be tweaked/tuned in the script's menu. I personally have the ETTR criterion set in a conservative fashion, as I wish to ensure no blown out highlights, ie I will be slightly underexposure relative to a 'perfect' ETTR. 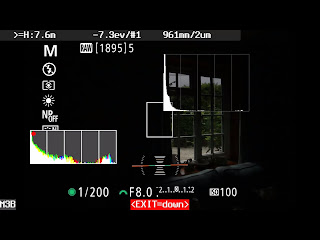 The above screen capture shows the scene after an ETTR request, clearly showing that there is just over 7Ev difference between the two extremes. Knowing this can then inform your choice of exposure bracketing recipe that gets set in the script, eg a single 'zero noise' bracket or, say, in this case, use the script's auto ETTR bracketing, which will take 2Ev delta exposures until the ETTR criterion is reached.

Hopefully this post has highlighted the power of the M3 Bracketing Script, both for focus and exposure capture. Personally, from a landscape photographer's perspective, I believe the M3, running CHDK and my M3B script, is a far better proposition than the M running Magic Lantern and my DOFIS script.

Posted by Grayheron at 4:59 AM