First, they fixed the disappearing icons bug that appeared in their last release of Photoshop.

Second they have added Super Resolution to Lightroom

Then, if things couldn't get better, I've just released the latest versions of my CHDK Focus Bracketing scripts: one for the M3 and one for all other cameras that run CHDK.

As an added bonus, if you have a DIGIC 6 CHDK camera, you can download Philmoz's build that eliminates all the previous flickering issues: DIGIC 6 Builds

The two scripts can be downloaded from the right: Landscape Bracketing Script (LBS) and M3 Bracketing (M3B). You can also read about the scripts on this CHDK page.

The scripts allow you to carry out perfect focus bracketing for various scenarios:

At each focus position you can carry out various exposure bracketing, eg:

As before you can add a dark frame bookend to the front and end of the bracketing capture, for easy identification in Lightroom.

As a test I used my S95 Point & Shoot camera and turned on sky bracketing.

The script took seven focus brackets, including an infinity bracket at 3 times the hyperfocal, as well as an auto sky bracket, which in this case addressed the high dynamic range between the inside and the outdoors. That is 1/6th second for the focus brackets and sky bracket at infinity of 1/50th of a second.

After ingesting into Lightroom and adjusting the first focus bracket and syncing to the other non-sky brackets, I selected all of them and used the new Lightroom Super Resolution option in batch mode (including the sky bracket). Giving me an image size boost to 7296 x 5472.

I then exported the resized focus bracket set to Photoshop and aligned and focus blended it. I then flattened the focus stack and brought over the sky bracket from Lightroom and did a second focus blend.

The resultant, flattened image was imported back into Lighroom and resulted in the following image (JPEGed for this post). 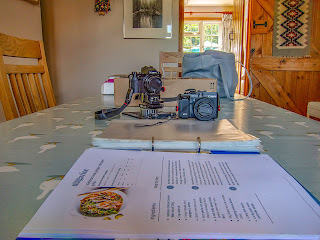 As usual I welcome any feedback of this or any of my posts.

Posted by Grayheron at 9:21 AM