As readers of my blog will know, I use Canon cameras because of their access to Magic Lantern and CHDK, especially Lua scripting.

Over the last month, the CHDK gurus (especially Philmoz) have made significant developments in CHDK, such that the CHDK display/drawing is now rock solid and has no conflict with the Canon 'drawing', ie no repetitive flickering.

Although the latest mods have yet to make their way into the CHDK trunks, I've been experimenting with a test version of the latest developments and have made a short video to show what things now look like.

I took the video on my M3. The set up looked like this: 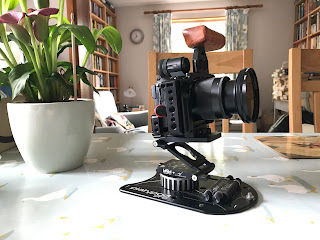 My M3 Bracketing script places an info bar at the top of the camera's LCD/EVF screen, giving the user real time focus and exposure feedback, in three groups:

As this post is just to show the progress that the CHDK gurus have made, I won't be going into details on using the script.

Here is the test video, showing the script's functionality and CHDK's new display stability. Note the left shift of the top bar is a feature of the HDMI capture. In the camera the bar is centred:

Posted by Grayheron at 4:30 AM