Assuming you have read the last post, you will know what this post is all about: namely adding pupil magnification to the M3 Bracketing script.

Without proof, the expression (in u space, ie from the front principal) for the next focus position is:

Where f is the focal length, p the pupil magnification and h is (f*f)/(Nc).

The thinking behind the new menu item is that it is easy to know if the lens you are using is of a retrofocus or telephoto design, by simply looking at the exit and entrance pupils (see the last post). Plus you can eyeball things to estimate the pupil magnification, ie without measuring anything.

In the case of a retrofocus lens, we know that if we ignore the pupil magnification (p), we will over estimate the depth of field; which could result in focus gaps.

As a reminder the following chart shows the amount we will over estimate if we ignore pupil magnification. Each contour is at 10% value, varying from 0 to 100% over/under estimate. The top part of the curve applies to retrofocus lenses (where we overestimate DoF by assuming a symmetric lens), the bottom to telephoto ones (where we underestimate DoF by assuming a symmetric lens). The chart also graphically shows a retrofocus lens is rather insensitive to pupil magnification at low image magnifications. 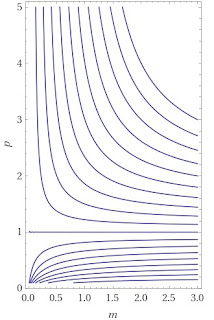 To be sure, let's use an M3 Brackets value of 5 and enter this as our assumed pupil magnification.

If we just look at pupil magnifications greater than 1, as we have a retrofocus lens, our plot now looks like this: 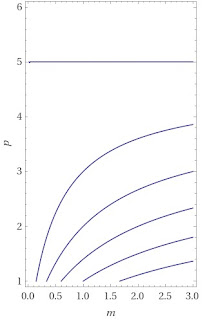 Let's zoom in a bit: 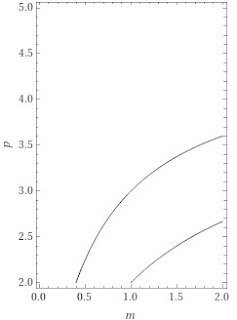 If, on the other hand, at the maximum object magnification the pupil magnification was only, say, 2, ie we were way off guesstimating p, we would be underestimating the DoF by just under 10%. Which is good when you are focus bracketing, where you are trying to not create focus gaps against your blur criterion. Nor do you wish to create large overlaps, which will increase the number of brackets you need to take.

As I don't wish to bore readers with more of the gory details, let's cut to the bottom line. When using M3 Brackets:

Finally, as I've said before, M3 Brackets is ideally suited for wide angle lenses, eg the EF-M 11-22mm. Having said that, I've now added my other EF-M lenses to the pre-registered list, as you can use M3 Brackets outside of Alt mode to set focus on any registered lens:

Posted by Grayheron at 9:47 AM