In this post I'm pleased to release the latest version of M3 Bracketing (M3B) script, that brings the augmented information into alignment with the Magic Lantern DOFIS version.

The latest version of M3B can be downloaded from the right hand link.

Rather than discuss the details of the latest uplift, let's look at a few screen grabs that shows the new functionality in action. 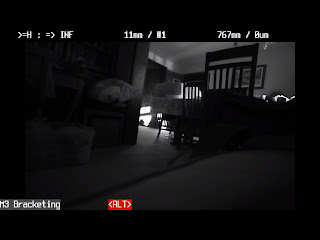 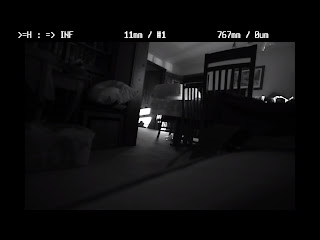 In the above screen grab all we have done is switch out of ALT mode so we can take some images, all the time having M3B tell us about focus, using a thick lens model, that accounts for pupil magnification.

If we were to take an image at this point the traffic light augmented information would not be presented, as we are at infinity (or beyond :-)) where there is no focus distance information from the Canon side.

Using M3B you thus always know when you have reached true photographic-infinity, where the Canon side is still providing information and the blur is at/near zero, or you have over focused, which is possible on modern lenses, and your infinity focus may not be 'correct'. 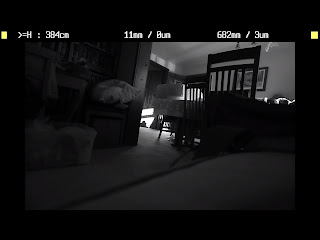 In the above screen grab we see that we have refocused to an infinity blur of 3 microns, at a focus distance, from the sensor of 384cm, ie nearly 4m away. We see the traffic lights telling us that we have not yet refocused away from the last captured image's focus position, ie we see two YELLOW traffic lights.

We also see the new feature in the centre info field. Rather than seeing the estimated number of brackets, we now see the blur at the overlap between the current focus and the last captured image. In this case 0 microns, as we haven't refocused yet. 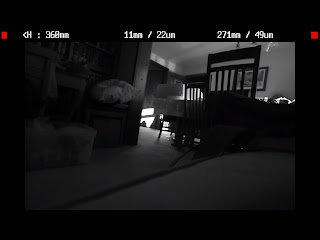 Here we see that we have refocused from 384cm to 360mm. This screen grab was taken when both traffic lights just went red, indicating we had opened up a focus gap. But, as we can see, the overlap blur at this focus is 22 microns, hardly any difference compared to the overlap blur criterion we set in the menu, ie 20 microns. Thus I would take an image here, rather than 'waste' time trying to see one GREEN traffic light: indicating an overlap blur at less than/equal to the criterion.

Bottom line: the new overlap blur augmented information allows you to speed up your M3 manual focus bracketing, to create perfect deep focus scapes. By choosing your overlap criterion, you can fine tune the focus quality you capture, eg use 20 microns, say, as a maximum, as the M3 has an APS-C sensor, but consider using a more exacting criterion if you wish, eg 15 or even 10 microns.