Perfect panos and the no-parallax point

In this post all I want to do is highlight a few ways to find your lens no-parallax point: that is the point around which you should take panos to minimise/eliminate image to image 'stitching artifacts'.

If you have followed my previous posts on DOFIS developments, you will know that the no-parallax point is the entrance pupil plane in a lens, ie not, as some say, the front principal plane, unless the pupil magnification is 1.

The simplest way to set up for a perfect pano is to adjust the lens, on the tripod, by placing the camera on a nodal rail and adjusting the position until a near and far object, eg two poles or the edges of two objects, align, irrespective of their position in the field of view. 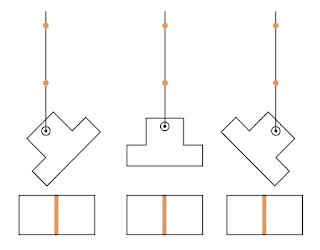 A second approach is to look up the entrance pupil location, eg https://wiki.panotools.org/Entrance_Pupil_Database, and mark this on the lens for future reference.
However, the potential problem here is that the lens may not be in the database, plus the position may/will move according to focus and, in some lenses, it is not always a single point on the lens axis, ie it may vary with the object’s angle away from the optical axis. Thus, even using this approach, one should check the position, for minimum impact, by using the first approach.

A third approach is to measure the entrance pupil location yourself. A simple, and quick, way is to shine a bright, pencil beam, torch/flashlight into the lens as shown below. If you ensure the torch is on the axis and rotate the torch, you will be able to find a point where the light has a maximum bloom, ie the beam is aligned to the opital axis of the lens. Once you find this point, you can then measure where the torch axis crosses the lens axis, ie at the entrance pupil. 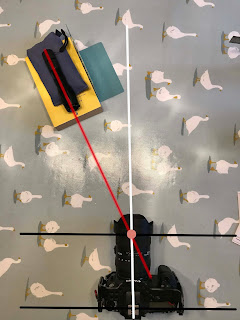 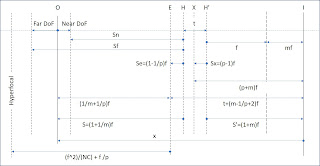 To calculate the position of the entrance pupil, relative to the sensor plane, all we need to know is the focal length (f), the the pupil magnification (p), the optical magnification (m) and the lens 'thickness' (t).

The entrance pupil location, from the sensor, may now be estimated from t+f(2+m-1/p).

As many will be making panos of landscapes and thus be at a focus beyond the hyperfocal, the above can be 'simplified'.

For example, at infinity the magnification approaches zero. Thus the entrance pupil is located at t+f(2-1/p).

At the hyperfocal, the magnification (m) is N.C/f, giving a lens extension at the hyperfocal of N.C, irrespective of focal length; where N is the aperture number and C the Circle of Confusion you have used to estimate the hyperfocal. In other words, small and thus, if focused at/beyond the hyperfocal, m may be ignored.

Things will get complicated if you are focus bracketing from less than the hyperfocal, ie for deep focus, and creating a pano. But I’ll leave that for another post ;-)

An, even cruder estimate is to ignore the pupil magnification as well as the optical magnification, ie assume p is 1. In this case the entrance pupil may be estimated to be at t+f.

Finally, if you are running Magic Lantern on your Canon EOS, you can use DOFIS to tell you the location of the entrance pupil, ie in your camera, but once again, doing an in-field check to confirm all is OK. In addition, with DOFIS, you know the FoV and thus can select the best image to image overlap angle to use with your pano rotator.

Hopefully this post has helped those that have been confused about achieving 'perfect panos'. As usual I welcome feedback on this post.

Posted by Grayheron at 7:57 AM