In this post we will look at using DOFIS to achieve perfect focus bracketing.

However, before we do, let's look at the latest DOFIS tweaks. First, the DOFIS LV UI has now been brought into line with the core ML UI. There are now two feedback areas, one shows the DoFs and blurs, the other additional information.

Secondly, adding a lens manually has been removed, as this was really an aid during the development of DOFIS. Thus there are now only two lens models in DOFIS: a split (zoom) lens model, ie with thickness and focus extension; and a thin lens model with thin lens focus extension. 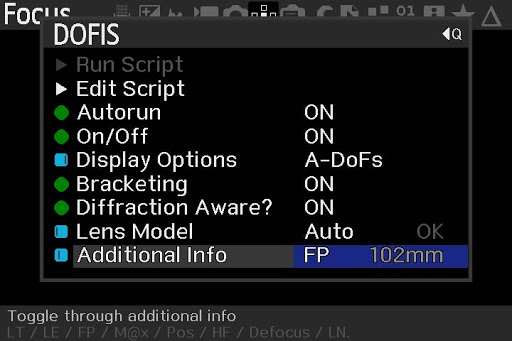 The above are the settings I used for this post. The DoF display was set to show the absolute near and far DoFs; bracketing feedback was set on; diffraction aware was set on; and the lens model was set to auto, where we see a lens match was found, ie to my 12-24 Sigma. I also set a CoC (for my 5D3) of 30 microns in ML.

Also, in the additional data menu, we see that DOFIS is estimating the (focus sensitive)  'front principal' is positioned at 102mm from the sensor plane at the current (minimum) focus. Remember, in the ML thin lens model, this would be positioned at the focal length, 12mm here, ie assuming infinity focus with no focus extension, which, to be fair, in this case, would be less than 2mm, ie the focal length times the magnification at the point of focus. 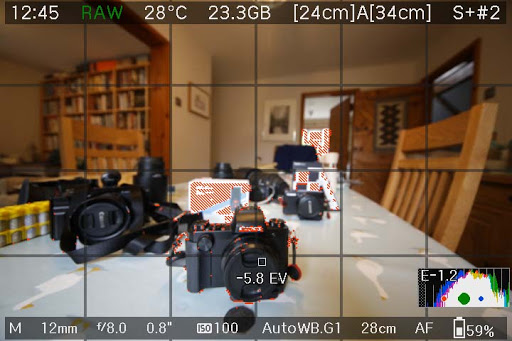 In the above image we see that the focal length is 12mm and we are at an aperture of f/8. We are also focused at the minimum focus of the lens, ie 28cm. The DOFIS display DoFs show that the absolute (from the sensor) near and far DoFs are 24cm and 34cm. The additional DOFIS data field, to the right of the DoF one, tells us that we are using a split lens model (S), that diffraction aware is on (+) and that you will need to take two focus brackets to get to/beyond the hyperfocal.

As we do not see any colour yet, ie yellow, green or red, we know we have not yet started focus bracketing. Focus bracketing can be initiated/reset at any time by changing focal length or aperture, or opening the ML menu.

So let's take an image. 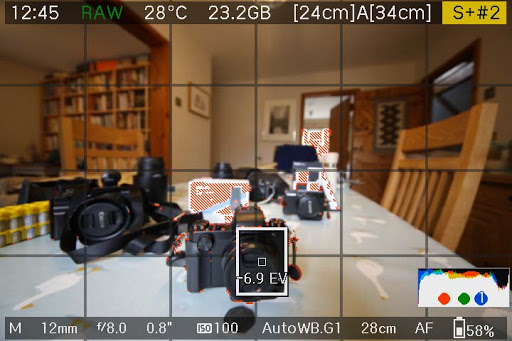 The only difference between the above and the previous screen, is that we now see the DOFIS coloured focus feedback. In this case, because we haven't refocused yet, we see yellow. In fact, the yellow will appear everytime your focus is the same as the last image's focus; thus giving you the ability to always recover your last image's focus position. 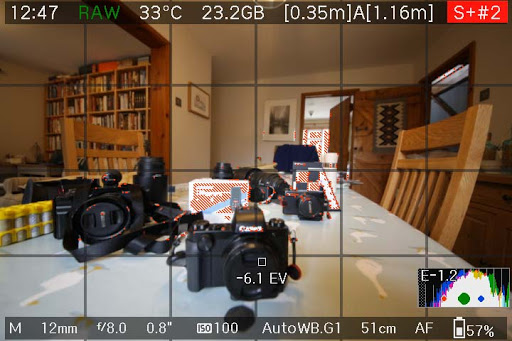 First, but not shown here, we would see the yellow change to green, thus indicating a positive focus overlap. But, as we continue to refocus, we will reach a point (above) where the feedback changes to red, thus indicating a focus gap. We see the near DoF reported as 0.35m (35cm), compared to the far DoF from the previous capture of 34cm.

If the green-to-red transition has just occurred, you are very close to a positive focus overlap, and you may elect to take your image at this point, or you could back off a little until green reappears. It's your choice.

TIP: you may wish to slightly lower you CoC to achieve a little bit of focus bracketing insurance, so you can capture images as soon as the green transitions to red. Once again, this is your choice.

We have now taken two images, but let's carry on refocusing towards infinity, as we wish to set the best infinity focus, ie beyond the hyperfocal, as the hyperfocal will generate a 'just acceptable' blur at infinity. 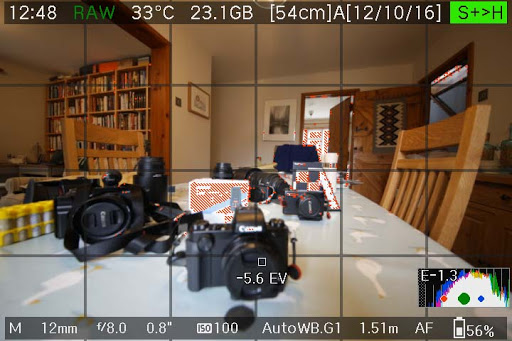 Here we see the third, and final, image being taken at a focus of 1.51m, where we see DOFIS is alerting us to the fact we are beyond the hyperfocal, ie showing >H and the blurs, and we have a positive focus overlap (green). We see that the near DoF, using the diffraction aware 30 micron CoC, is at 54cm from the sensor plane and positively overlapping with the previous image (green), and, importantly, we see that the infinity defocus blur is at 12 microns, the f/8 diffraction blur is around 10 microns and the total infinity blur is 16 microns, ie double the 'quality' of that at the hyperfocal. Remember, as we are using diffraction aware, the total infinity blur will never be less than the diffraction, ie 10 microns, even when focused at infinity.

Hopefully, the above, together with the previous posts, has given you all the information you need to use DOFIS in your photography and videography.

As usual I welcome any feedback on DOFIS, and would like to hear from other users' experiences.