As I'm still shielding, because of C19, and am also recovering from a broken leg and surgey, I thought I would take a quick relook at my auto deep photography experiments.
Currently I have auto deep focus capture running on the following cameras:
I'm going to ignore the OMD in this post,  as it relies on a propriety solution, and is not optimised for landscape deep focus capture.
The G5X and G7X have the smallest sensors, both using a "1 inch" format sensor, with the G1X upping the size to "1.5 inch" format.
This leaves my EOSM3 camera as the only APS-C format that runs one of my CHDK auto focus bracketing scripts. The latest version of the script can be downloaded from the link on the right: M3 Brackets.
Once you have CHDK running on the M3, the script is simple to use, with the following UI:
As to some test results, I set the 11-22mm to 11mm, F/7.1 and ISO100, at an exposure of 0.5s. I used the Min2INF option and the script took 13 images, which I post processed in Lightroom, with a round trip to Helicon Focus.
Using Jeffrey Friedl's Lightroom “Metadata Viewer” Plugin, it was easy to extract the following (lower) focus distances from the EXIF data:
The resultant, deep focus, 'post processed' image looks like this: 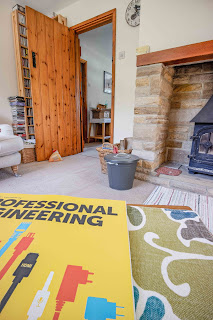 Hopefully this short post has illustrated the power of CHDK to automatically create deep focus images on an APS-C cropped sensor, ie the EOSM3.
As usual I welcome feedback on this post.
Posted by Grayheron at 5:34 AM