The latest version of my Long Exposure (LE) Simulator script, that allows you to capture LE exposures without NDs, may be downloaded from the right-hand link.

This version tidies up a few things, to better link to my workflow, which is:
As for RAW processing, simply import into MLV App and export the MLV as an averaged TIFF.

As for post processing, well that's down to your artistic desire. This is why I take an auto bracket set as well as the MLV video, as I can blend any of the auto brackets or any of the induvial MLV FLV frames, with the averaged MLV.

As an example, this image was taken at our weekend break at Port Quin, in Cornwall. I first captured an Auto Bracket set and then 133 frames worth of MLV FLV capture at 2 fps and a shutter of 1/3s. That is a simulated exposure of about 45s, ie 133 * 1/3s.

I processed the MLV and blended the MLV averaged one, for the land and sea, with one of the Auto bracket captures that covered the sky, as I didn’t want to smooth out the sky. 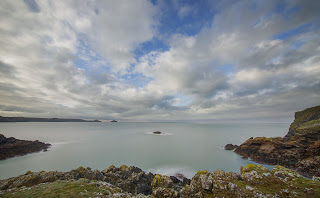 The script appears pretty robust, at least on my 5D3, and thus now I can carry out 'emergency LE' captures, ie without NDs.

As usual I welcome comments and feedback on this post.
Posted by Grayheron at 1:03 PM