Warning this is a longer and more detailed post than usual!

The above script (as usual accessible on the RHS of this site) has been written to support ‘deep focus’ photography and specifically capturing focus brackets that seamlessly cover the depth of field from infinity down to a near object of interest.

It is ‘best’ used with wide angle lens, but can be used at any focal length, with care!

Most times deep focus can be handled by focusing at, or ideally, just beyond, the hyperfocal, ie for focus insurance. If focused at the hyperfocal distance (H), the depth of field is, by definition, from H/2 to infinity.

In this case the accepted ‘focus quality’ will go from H/2 to infinity, and is mainly influenced by two dominant ‘blurs’, usually taken together in quadrature. That is, the so-called circle of confusion (CoC) criterion that you have decided to use to cover the lens defocus blur, that varies through the scene and is only zero in the plane of focus; and the diffraction blur, which is essentially the same throughout the scene, only changes with aperture and is never zero.

For Full Frame (FF) cameras the ‘accepted’ defocus CoC, ie without taking account of diffraction, is usually stated as 29 microns, so let’s call this 30 for convenience. This 30 microns CoC is based around an arm’s length viewing of a 10in print, by a person with normal eyesight. Closer scrutiny, ie by judges, and larger prints viewed close-up in gallery, will require CoCs less than 30. A billboard 30m away, less.

As for a sensible minimum defocus blur (CoC) to use; well you can’t squeeze a line pair/dot (one black + one white line) into less than two sensor pixels: so let’s pragmatically accept an absolute lower CoC of two sensor pixels, ie around 12 microns on my 5D3. Both numbers being adjusted by the crop of the camera, ie 1.6 on a Canon APS-C camera, or 12/1.6 to 30/1.6.

Accounting for diffraction complicates the above a little, but, as we will see, we can ignore diffraction if we sensibly select the defocus (Coc) blur in Magic Lantern, ie between 30 and 12 on my 5D3.

In general, for any lens with a focal length of, say, 30mm or less, the ROT will always give a higher quality focus than the usual hyperfocal tables; that assume a fixed 29-30 microns. Thus, shooting with a WA lens, ie less than or equal to 30mm, means that, at f/10, the depth of field will go from FL/20 to infinity, with an infinity blur (defocus CoC) of FL in microns, if you focus at the ROT-based H, ie FL/10 in meters. Also, the wider the lens, the higher the focus quality, ie the lower the infinity blur, will be using the ROT approach: all other things being equal, which there’re not , of course!

The key thing to take away from the above is: know your H and know how to use the ROT.

Let’s now assume you are focusing at less than H/2 and you still require to cover focus to infinity, ie you can’t use a single image. In this case you have various options.

You could naively follow the advice some photographers give and focus 2/3 into the scene. But then you will likely be disappointed with your result. The ‘2/3 rule’, ie depth of field is split 1/3 in front of the point of focus and 2/3 behind, is only true at H/3. So, please don’t use this ‘rule’.

You could use the depth of field scale on your lens. But many new lenses don’t have such scales and if they do, they’re not usable (an example of a useable scale on a modern, high quality lens, is the one that Irix use: BTW my 11mm Irix appears to be calibrated around a defocus CoC of the FL in microns, ie it’s a ROT scale!). Some old, manual lenses do have good depth of field scales, but you will need to calibrate/confirm they are still OK or, simply manually focus, ignoring the focus scale reporting on the lens, and then use the depth of field scale to focus bracket from your point of focus.

If you have an AF lens, and are running Magic Lantern, you could use my DoF Bar script to give you the required manual feedback for focus bracketing.

Finally, if you have an AF lens, and are running Magic Lantern, you now have the ultimate focus bracketing tool: my Get Focus Brackets script.

Once loaded in the normal way, ie turn on auto start, this script may be switched on and off under its ML Focus menu. There are three options:
The script will only run if the lens is an AF one and you are in LV. If running the only feedback from the script is displayed in the top right ML bar. Here you will see one of two ‘B number’ presentations:
B=n, where n >= 3: showing the estimated number of brackets the script will take (for n>3, B = +/- 1);
B=0 means the script will not run: for whatever reason ;-)
B=666 means diffraction is dominating, so open up the aperture

Once you see B=n, where n >= 3, you should be confident the script will run.

The speed the script runs at is camera dependent. On my 5D3 it’s ‘zippy’ but not super fast. But IMHO, if you are on a tripod and doing land/city-scape, deep focus, photography, you should be relaxing and enjoying life. OK, if the capture is really slow, then you may have to deal with a little bracket to bracket movement – but such is life, ie it’s not perfect :-)

If you are focused beyond H/3, ie B=3, don’t worry about fine tuning focus, as the script will always take three brackets at/around H/3, H and 3*H. The 3*H shot being the infinity focus shot, generating an infinity blur of the ML CoC/3. Hence if you have an ML CoC set at 30 microns (ie full frame and less by the crop on an APS-C camera), the infinity blur will be around 10 microns = 30/3.

An alternative approach is to switch off the ML diffraction aware, ie use the Simple option, and explicitly adjust the CoC under your direct control. If you wish the brackets to overlap at 2/3 of the CoC, ie at 20 micons as opposed to the normal 30, then dial this in to the ML depth of field menu: but remember to select Simple. The following illustrates what overlap means, ie it is a fraction of the 'normal' CoC = the CoC you dial into ML: 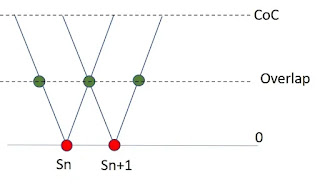 To use the script, put the camera in M mode and Live View, and simply focus on the nearest point of interest in your scene that you wish to see in focus, ie the front of that object, using any focusing method you wish: doing this means you will have a little insurance in front of the focus.

Next review the B number and confirm it is acceptable, ie not too large.

Assuming composition and exposure are OK, now press the script’s trigger key. The default is the RATE key, but you can easily change this in the script. On the 5D3 the RATE key works well for me. Once running and useable, ie not switched off, this trigger key is hijacked, ie it won’t be usable in normal mode. To access it in standard mode, simply switch off the script in its menu.

The first time the script runs after every camera start up, it carries out a short calibration test to check the lens motor’s chirality, ie what direction does the lens move in when Lua lens.focus() is called. This is all transparent to the user.

Once captured, ingest the images into your post processing environment, I’ll assume Lightroom in this post, and you will clearly see your bracketing sequences, ie delineated by bookends.

For those that like seeing data, you can then get a feel (sic) for where each image was focused, by exploring the makers data in the image’s EXIF. This can be accomplished several ways, eg using the EXIF plug in from http://regex.info/blog/lightroom-goodies/metadata-viewer or with EXIFToolsGui at http://u88.n24.queensu.ca/exiftool/forum/index.php/board,7.0.html.

Interpretation of the focus position from the EXIF is not straightforward, as Canon decided to write out two numbers: FocusDistanceUpper and FocusDistanceLower, rather than Focus. Also, there appears to be some debate as to what these Canon EXIF data mean. Until someone says something else to correct me, I suggest you assume (sic) that the focus position is in the middle of the upper and lower numbers.

Once ingested in LR you then need to merge the focus brackets. Unfortunately, you can’t do this only within LR at the moment, ie without a little help. Personally, I use one of three round trips routes:
For example, in Helicon Focus, which I use most of the time, I find Method B works well with the script’s seamlessly created focus brackets; and it’s pleasing to see Method B unfold in front of you, ie first the depth map, followed by the detail being added in.

You may, however, find you need to adjust some of the images, ie to remove bracket-2-bracket movement artifacts. Each of the above allows you to do this, eg via adjusting masks or clone from one image to the composite. 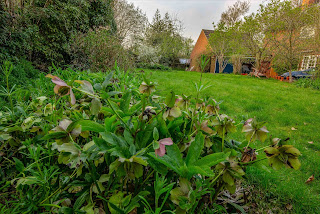 The camera was in M mode and I had Dual-ISO switched on. I ML ETTRed to get 1/13s. The script indicated 4 brackets would be taken, ie B=4, but remember the +/- 1 for the B number.