Looks like a miserable day weather-wise, so I decided to refine my workflow associated with my visible band & IR band digital (EoSM) backs on my 645 Vizelex RhinoCam system.

The RhinoCam allows me, via my Mamiya-Sekor 45mm lens, to create seamlessly flat large 645 image or a pano, ie no nodal points to worry about ;-)

In 645 mode, the EoSM is used in portrait mode, as below, and in pano mode it is used in landscape mode. 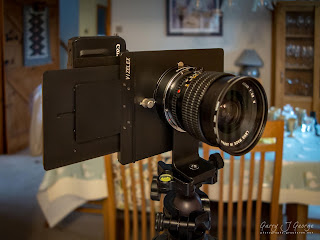 I've recently been exploring using an ML-based work flow, for the exposure, with an extended DoF technique, through using focus bracketing with the sensor bracketing.

Following composition setting, I first use ML’s ETTR to help me select a suitable base exposure for the highlights; and decide if I need to exposure bracket as well.

From there I may adjust things as required. For example, I could add some background focus insurance and set the focus to, say, 6m, ie rather than the theoretical 4.5m.

Note that, because we are using a 645 format, I can also push the aperture more than we would with a 35mm format, ie extending the DoF. Thus I could go up to F/20 with my visible band EoSM back, but ‘only’ F/18 with my IR EoSM back; before diffraction started to dominate.

As the Vizelex RhinoCam system needs to take 8 images (two rows of 4 sensor brackets) with the EOSM in portrait mode, this gives me the opportunity to adopt two focus strategies. One for the top row and one for the bottom row.

That is I can focus bracket as well as sensor bracket in the same image. And, as mentioned above, if required, I could also exposure bracket at each sensor bracket, eg using a Zero-Noise bracket at, say, 4Ev for the shadows; that is if a single exposure wont hack it.

I then focus at 6m, in this case, and take the top four sensor bracket images (with exposure brackets if required).

After ingesting into Lightroom, I simply use the LR Merge capability.

As an example (indoor) test shot, I used my visible band EoSM and ETTRed for the highlights, at ISO100 and at F/16. Giving a base exposure of 1.3s. I set the ML Auto bracketing to 2 images and +4Ev to create a single ‘zero-noise’ bracket for the shadows, ie at shutter of 20s. I focused the top row at 6m and the bottom row at 2m.

After ingesting into LR I tried to use the combined HDR-Pano merge in LR, but this failed with an ‘error’ of not enough matching images. I therefore resulted to doing a two-pass merge process in LR: HDR the two exposure brackets first, with auto stacking switched on; then do the pano merge in LR.

Finally, I tweaked the image for ‘a look’. 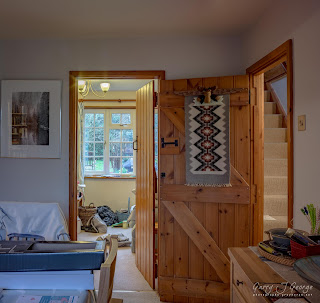 I hope some have found the above of interest and as usual I welcome any feedback.

Posted by Grayheron at 4:01 AM