As we all know, sometimes you just don’t have the right kit with you when you are out shooting. One example is Neutral Density, or ND, filters: unless you can predict what your your base exposure will be, and know your, long exposure, vision in advance; there is a risk you won't be able to realise the exposure you want.

For those situations where you find your base exposure lacking, ie a shutter of, say, 2 seconds, even at an aperture of F/22, and you were looking to capture an image at, say, 30 seconds; you may wish to have a look at my ND Bracketing script (link on the right).

This version of the script was explicitly written for my 5D3, ie button locations and availability: but any competent Magic Lantern Lua scripter will be able to recode to suit the layout of their EOS. Also I have annotated the script with comments and highlighted hooks, eg where you can insert your own controls, eg to switch off one of your scripts that might conflict with the ND script.

I personally use the script with my Focus Bar (FB) script, and have 'deconflicted' the two, ie if the ND script is running, it will switch off the FB script. I also allocate the FB and ND scripts to my Canon C3 custom mode: thus C3 mode is now my LE mode.

With the script off, my screen looks like this: 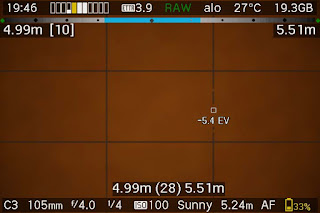 To switch the ND script on I simply press RATE (which is 100% hijacked by the script, but personally I never use the RATE key). The screen will now switch to look something like this: 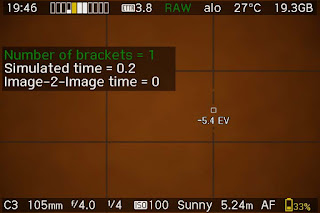 The green text tells you that if you use the MENU and INFO keys you will be adjusting, down and up, the number of brackets (images) to take. 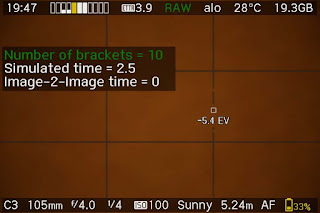 Here we see the script is showing that we are requesting 10 images and, of course, at a shutter of 1/4s this equates to a simulated long exposure (LE) of 2.5s.

Normal access to the MENU and INFO keys is achieved by switching off the ND script, ie pressing RATE.

If you press the ZOOM key when the script is running, the screen looks like this: 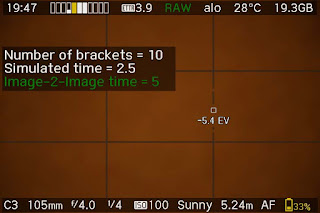 This shows that, in addition to the 10 images, I am now requesting a 5s delay between images. This delay allows you to carry out 'people removal' bracketing, ie through post processing using Photoshop statistics. Once again you can use MENU and INFO to adjust the time delay. 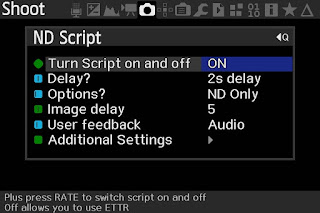 The ND only option shown means that only the requested images will be taken. The other option is ND+. In this case the script will take an ML advanced bracket sequence after the other images have been captured. Thus in post you will have a near perfect bracket set: the ND brackets that will be combined using the smart object stack mode technique and the exposure set, that you can blend in.

The first image delay is either 0, 2 or 5s. So switch of Canon delays.

The User feedback is off, audio, led or both. This is useful to help in tracking the script's start, which is achieved via a long (5s+) press of the SET button. 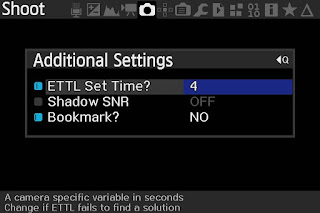 The bookmark is either NO or YES. YES will place a dark frame at the start and end of the capture sequence: to help differentiate a sequence in post.

Shadow SNR is a control variable that is between 0, 2, 4 or 6Ev and controls the ETTR shadow end. Use this to ensure the advanced bracketing starts at a shadow exposure that is 'brighter' that if the value was 0. The ETTL Set Time is there to help ensure the ETTR finds a solution.

The script will remember the top menu's state, but not the sub menu.

As for post processing, there are two basic ways. You can load the brackets, after adjusting and syncing in Lightroom, into a Photoshop single document, ie with the brackets as layers. Then create a single Smart Object and use the Layers Smart Object statistics, say on Mean. However, unless you have a lot of RAM and/or don’t have a lot of brackets, you may fail with this approach. It is also very slow.

An alternative approach, thanks to Neil Farquharson, is to download Image Averaging Script at: http://www.verdantvista.com/Photoshop-Image-Averaging-Script

Once you have the script loaded in PS, it is one click, and near instantaneous, process to merge any number of layers, ND brackets, into a simulated LE image. This is my preferred approach.

Here is a quick and dirty example, taken this lunchtime at Pangeborne, on the River Thames.

The slowest I could manage, with the ND filters I had with me, was 5s; which looked like this on a single image: 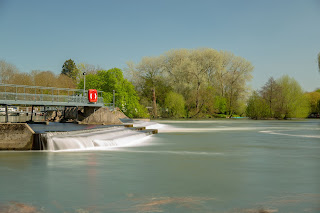 As you can see in the near field, there was lots of debris in the water.

So I took 12 images, for a LE simulation of 60 seconds, and processed the images using the Image Averaging Script. The resultant image, with a little post processing in LR, looks like this: 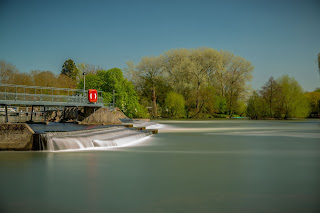 And another example of the script's use. This time 15 images at 1.6s = 24 second LE simulation. 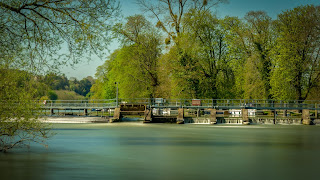 Finally, this next images illustrates an advantage of this ND stacking technique over using the 'perfect ND' in a single image. That is if something is moving, for instance in the scenes today there were boats and, of course, over an LE time frame they would move a lot. However, over a shorter time their movement is less. Thus it is a simple matter to use the simulated ND image with one of the base images and blend objects back in: in the example below the boat. 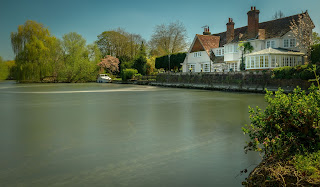 As this post isn’t about full post processing to completion, I won’t talk about taking the image further in post, eg relighting etc. However, in a future post I will likely show a few more examples of using the this new Lua script; as well as how to use the script to help remove people in post :-)

As usual I welcome any feedback on this post.
Posted by Grayheron at 8:20 AM