Let me say up front, the Irix 11mm is a very impressive lens. It has very low distortion and has an incredible field of view. The lens is a manual one, although aperture is fully electronically controlled.

Readers of my posts know that the ‘standard’ DoF tables, that you typically see online, assume a Circle of Confusion criterion, used when calculating the defocus, of around 30 microns on a 35mm, ie adjusted down by the crop for smaller format cameras. Many tables also ignore diffraction. Such tables are not that useful if you use them to ‘just’ set the hyperfocal focus, as you will not achieve high quality focus in the far field (read some of my previous posts on infinity blurs).

There are some great DoF apps out there, which I have previously spoken about, eg TrueDoF-Pro; and, of course, for Canon users, the ultimate DoF app is my (in-camera) Focus Bar script. As the Irix doesn’t communicate focus distance, the FB script is useless.

However, other than my Focus Bar, the apps don’t tell you much about the infinity blur, ie as you focus past the hyperfocal point.

However, the Irix has a killer feature, that is usually missing on modern AF lenses: a usable Depth of Field scale, which can be utilized to:

However, to use the DoF scale, it is critical to understanding how the Irix designers laid out the scale. For example, if we ignore diffraction and ‘just’ use the defocus blur to calculate the hyperfocal distance at 11m and F/16, using a CoC (blur) of, say, 30 microns, we will get a hyperfocal distance of about 0.26m.

However, if we set the Irix infinity mark to the F/16 point we get a hyperfocal distance between 0.7 and 1m. Clearly the Irix designers didn’t use a ‘normal’ CoC of 30micron,  ignoring diffraction. Thank goodness!

It is easy to estimate that, at the infinity end, the Irix DoF scale appears to be based on a defocus blur (nee defocus CoC) of around 9 microns. This is very exacting and if used will result in high quality focus results.

We also know that defocus blurs less than two sensor pixels represent a sensible lower limit when we are using infinity-biased focusing, ie focusing beyond the hyperfocal, but short of the (optical) infinity.

On my Canon 5D3, this limit is 2x6.3 microns, say 13 microns. The Irix is thus well placed to deal with cameras with high density pixels. For example the 5DS has a pixel pitch of 4.14 micron, ie a sensor line-pair limit of just under 9 microns.

At distances shorter than the hyperfocal, the Irix DoF scale appears to make use of a defocus blur of less than 9 microns, ie according to focus position and aperture, anything from 6-9 microns.

So what does this all mean. Basically, using the Irix DoF scale means you will get high quality focus: all assuming the scale is distance calibrated. I did a quick and dirty test, by focusing on an object at 1m and 0.4m away and both seem to indicate the Irix focus scale was spot on, ie I don’t need to recalibrate my lens yet :-)

Summing this up, and based on one day’s worth of experiments, I would say an optimum workflow, at least to get you going in the right direction, would be to set the Irix 11mm to F/8 or F/11, ie keep away for the high diffraction F/16, and use the DoF scale to either set the hyperfocal or carry out a focus stack.

Here is an image to illustrate the hyperfocal setting at F/11, ie suggesting a defocus CoC of around 8 (sic) microns at F/11: 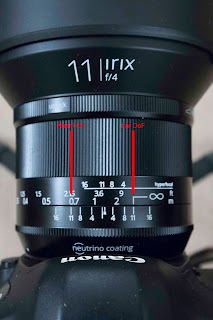 As for landscape focus stacking, it's simple. Take this F/11 example workflow:

Use your focus stacking software to blend the three images to achieve an incredible, high quality, focused image from about 0.35m to infinity.

As I explore the Irix 11mm I’ll be writing more posts, but at this stage I’ll simply say, the lens looks like it is going to be a key part of my camera bag. For instance, this test image was taken when I was out doing errands. I hope you agree it shows off the Irix as an unusual lens. 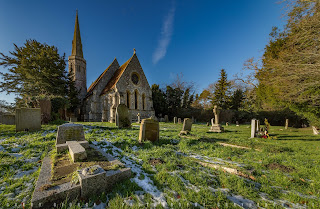