In the last article I introduced the idea that focusing at the HFD is not the ideal strategy for landscape photographers, eg you will only achieve acceptable focus at infinity.

An alternative strategy is to focus at infinity and stop the lens down to the smallest detail you wish to see in the near field, ie foreground. For example, if I wished to resolve details down to 1mm, say, and I was using a 12mm lens, I would set the aperture to F/12 to achieve the 1mm goal, ie 12/12.

The optical blur is zero only at one point, ie the plane of focus. Either side the blur increases, but not symmetrically (see the last post). For a given optical (acceptable) blur condition at infinity, say, 30 microns, we can calculate the focus point to achieve this, ie the hyperfocal distance. Also, even if we move the focus to infinity we only lose a small amount of depth of field in the foreground, ie the near field DoF, if focused at the HFD, is the HFD/2. At infinity focus the near (acceptable) DoF moves to the HFD, ie we only lose HFD/2 in focus.

To help Canon (sorry Nikon friends) Landscape photographers I have up issued my HFD script to provide Live View feedback on the blur diameters (in microns) at infinity. The on-screen numbers are (see screen shot below): 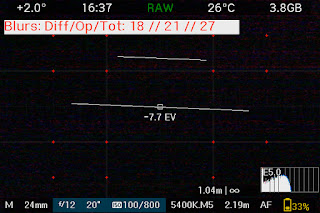 In the above screen shot (24mm at F/12) we see that the ML DoF info says we are at or beyond the HFD, as the far DoF is infinity. The near (acceptable) DoF is at 1.04m. We can also see that the diffraction blur is about 18 microns and that the optical blur at infinity is 21 microns, giving a total blur of 27 microns, ie less than the HFD criterion of 29 microns that was set, illustrating we are focused slightly beyond the HFD and towards infinity.

Knowing what we do about focus, HFD and infinity, all we need to do is to move the focus a little towards infinity until the optical blur is, say, just (sic) 1, which represents the farthest point away from infinity that gives the advantages of focusing at infinity. 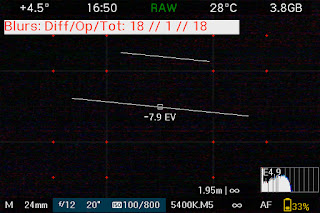 This second screen shot shows that we have now optimised the focus, such that we achieve the benefits of optically being at infinity, although we are focusing well short of it, and protect the near depth of field, ie we have only reduced this from 1.04m to 1.95. The total blur at infinity reducing to 18 microns, ie from the 29 microns at the HFD.

Note that an optical blur lower than a certain criterion is meaningless, as one can not resolve things smaller than, say, two times the sensor pitch. Thus you should know your sensor blur limit. On my 5D3 the pitch is about 6.3 microns, so a sensible minimum total blur is twice this, say 13 microns.

Note the script 'rounds up' blurs and only shows integer values.

Now we have access to the blur data in a dynamic sense, ie it varies as we vary aperture, focal length and focus point, we now have an additional focus tool, to augment the Magic Lantern Depth of Field data that is displayed dynamically in LV.

Using this new feature is easy. First load the script: note the script has help info so please read this first. The blur data is displayed as a default, but can be switched off in the script’s menu. You can also reverse the “On”,”Off” in the menu to default to Off.

The script is live (until switched off) and the lens move functionality is accessible via the selected buttons (which the user can change in the script, to account for different cameras). The default buttons are the MENU and the SET. Pressing MENU twice, ie in succession, gives you access to the normal MENU functionality.

Pressing MENU followed by SET moves the script into interactive mode and you will see an info box in the top right of the ML top info bar. You toggle through the options using the SET button and select a given choice by pressing the MENU button, which leaves interactive mode. On leaving interactive mode, if a lens move has been requested, then it will occur. The options being:

A typical (ML-based) work flow would look like this (assuming you are on a tripod):

As usual, I welcome feedback on this post and please don’t hesitate to suggest improvements to the script.
Posted by Grayheron at 10:05 AM