Sometimes it's best not to plan

Although today, as a non-working Friday, I was hoping to get out and do some photography: when I looked at the flat-white sky I knew the day would have to unfold in its own way. So the first decision was where to have breakfast?

So it was off to the Saddleback Farm Shop at Brightwalton www.saddlebackfarmshop.co.uk/

Once we were suitability refreshed with Eggs Benedict and a Cappuccino, and we had purchased some bespoke Gin, we were ready to return home: but then we saw this church in the distance, which we found out was All Saints in Farnborough, ie Farnborough in Berkshire not Hampshire.

Farnborough was apparently held by Abingdon Abbey before and after the Conquest, and up to the Dissolution. The manor was assessed at 10 hides before the Conquest but only 4½ in 1086.  The church is in the centre of the village, and has a Perpendicular West tower of ashlar, squared blocks of masonry cut to an even face, and single nave and square chancel of flint rubble. The church has opposed North and South doorways, with a South porch.

It has a ring of 5 and the largest and oldest bell, the 8 cwt tenor, was cast at the Wokingham foundry sometime around 1400.

We found out that stained glass of the west window of the nave was designed by John Piper as a memorial to his friend John Betjeman, who lived at the Old Rectory at one time. They collaborated on architecture books; such as “The Berkshire Architectural Guide ” 1949. 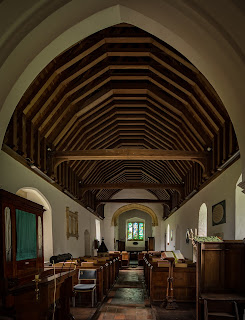 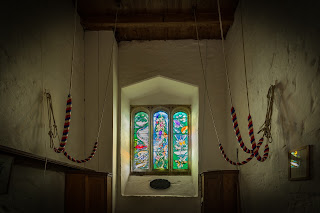 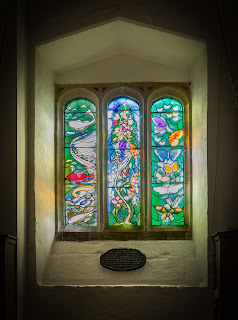 The inscription in Delabole slate beneath the window was cut by Simon Verity and placed there in 1986. It reads: In memory of


SIR JOHN BETJEMAN
1906 - 1984 Poet Laureate
sometime resident at the Old Rectory Farnborough
This window, designed by his friend John Piper
and executed by Joseph Nuttgens, was placed here
by the Friends of Friendless Churches.

I am the Resurrection and the Life
As far as the photography side, I used my EOSM and my 10-20mm EX DC HSM Sigma, via a EOSM-2-EOS adapter. In all the images I first ETTRed via Magic Lantern and then used the ML Auto Bracketing. Focusing was a non issue at 10mm, F/8, ie I focused at about a meter to ensure acceptable (hyperfocal-like) sharpness from about 0.5m to infinity.

Post processing followed my normal workflow: I first ingested the images into Lightroom; I then use the native HDR feature in LR to create 32-bit DNGs; I then made basic adjustments in LR and did a round trip to Photoshop, to undertake some luminosity masking and local tonal tweaks. 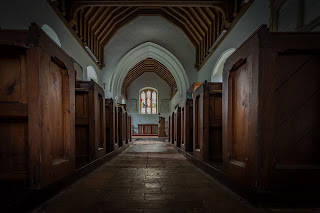 The one thing I was not happy with is that Auto bracketing didn't give me enough 'protection' at the highlight end, hence the window above, for example, is a little blown out for my liking. This is something I intend to explore further, ie how to guarantee full highlight capture in high dynamic range scenes such as one finds in churches.

Over all: an enjoyable Friday :-)

Posted by Grayheron at 6:43 AM