One technique that many photographers ‘ignore’ is long exposure photography. The reasons are simple: if shooting in bright conditions then getting to long exposures is near impossible without the use of Neutral Density (ND) filters; with NDs you need to carry extra equipment, the NDs, to cover you various lenses as well as various NDs to ensure you can cover a wide LE domain; if you try and ‘save some equipment’, by using a variable ND, then you may generate exposure variability across the sky if shooting too wide.

If you have Magic Lantern enabled on your Canon EOS, then you could make use of the RAW video feature and lower the fps to capture the 20 x 1/10 exposures. But what if you wanted to simulate, say, a 60 second exposure. Well you could exend the RAW video technique, but you will need to post process some 600 images!

This is why I developed the following ‘hybrid’ approach. That is carrying a single ND to slow the shutter to a reason speed for LE simulation. In the test example in this post I set myself the task of taking a 60 second exposure in daylight. The base exposure was about 1/300s, but I had access to a 10 stop ND. But this ‘only’ shifted my exposure to about 3 seconds, ie a factor of 20 down from a 60 second exposure goal, hence I still needed to capture 20 images: still a lot better than some 18,000 images, ie 60/(1/300).

Rather than try to do this by hand, I decided to write a simple Lua script to do all the hard work for me. In addition, I decided to make use of the Magic Lantern Full Resolution Silent Picture (FRSP) feature, that directly reads the imaging sensor without (sic) any shutter actuation. The downside of FRSP is that you need to limit the exposure time to between about 0.1s to 15s; which for my LE use was fine. In my script, I coded this to 0.25s to 14s.

To run the script, all you need to do is to compose, set your exposure and ensue your shutter speed is between the limits above (the script will warn you if you don’t satisfy the FRSP limits). In the test example below (shot in my garden this morning), I used my ND1000 on my 24-105mm at 24mm, which reduced the exposure to 3.2s at my selected F/10 aperture.

To run the script, I simply went into Live View, turned on the script (it’s in the ML Shoot menu), selected bookends (which places a dark frame at the beginning and end of the LE bracket set to help differentiate bracket sets in post), set a 60s LE exposure request and a 2 second delay.

The script then automatically captured 22 DNGs (20 LE brackets + 2 bookends), silently and without any shutter actuation.

I then ingested the DNGs into Lightroom and things looked like this: 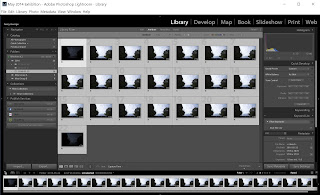 I then adjusted the first LE image to my liking and synced the other 19 to this first image. I then used the LR/Enfuse plugin to process the 20 images, making sure that contrast weight was set to maximum and exposure weight to minimum. I then tweaked the post processed image in Lightroom.

For comparison, here is one of the 3.2s base images, clearly showing that at 3.2s there was little (LE) impact in the sky: 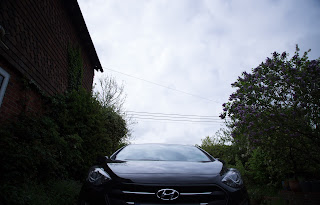 And here is the 60s simulated (Enfused) image, showing the LE effect in the sky (including a sensor/lens spot I should have dealt with!): 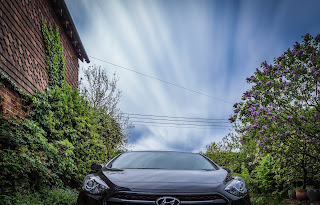 Finally, some may be saying why bother. Well apart from the LE simulation for artistic reasons, the attached script will also generate a fixed exposure bracket set (without shutter action) and this could be useful for the following situations:
For Canon users, that wish to play around with Shutterless LE bracketing, here is the Lua script.

Posted by Grayheron at 8:30 AM