In all the years we were living in the US I never tried to take images of fireworks on the 4th of July, when the Americans celebrate something or other.

This Saturday was Bonfire Night in the UK, where we Brits celebrate the failure of Guy Fawkes' actions on 5th November 1605 in trying to blow up the House of Lords. Of course some are celebrating a ‘good effort’ :-)

“Remember, remember the fifth of November,

We see no reason

Should ever be forgot!

To blow up king and parliament.

Three score barrels were laid below


By god's mercy he was catch'd

With a darkened lantern and burning match.


And what shall we do with him?

As kids we always made a ‘guy’, that we put on the bonfire on the 5th, and went round the streets asking for a ‘penny for the guy’, so we could have enough money to buy some fireworks. One of my earliest memories, when I was about 10 years old, was meeting my first American, a tourist, who was obviously saddened to see this British kid out on the streets ‘begging’. So, rather than get a penny, tuppence or even a sixpence, as you would from a Brit, he gave me half-a-crown (For US readers that was two shilling & sixpence, the largest British coin in large scale circulation during the pre-decimal era). 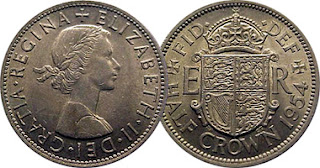 So this Saturday we found ourselves with friends and close to a neighbour of theirs Bonfire Fire Party. A chance to finally have a go photographing fireworks: which I found isn’t that hard.

I found it was about timing and simply grabbing a few exposures, all round the 10s mark, ie on a tripod.

Because we were watching a ‘free show’, I wasn’t that well positioned to see the fireworks and my near field interest was rather limited, but I did managed to get a tree in the scene in some captures. 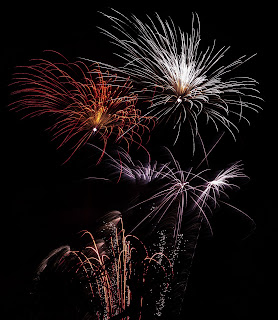 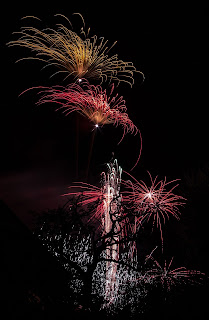 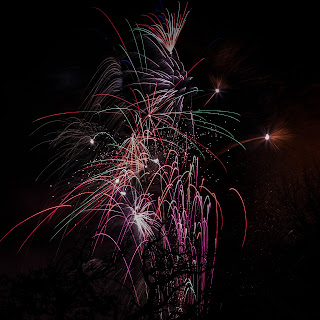 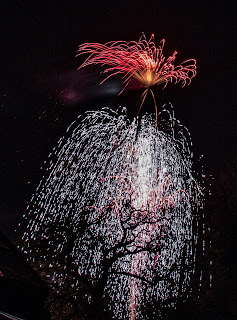 Bottom line: next year I think I will pay to get the best vantage spot :-)
Posted by Grayheron at 1:05 AM